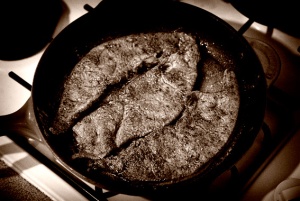 Calf’s Liver is far more tender than that of lambs or pigs and because it’s from cattle it can be served pink.

Place some course sea salt, peppercorns and herbs into a mortar and grind with a pestle until you have produced a powder of herbs. Take care not add any of the stalks the herbs come on, as they will not grind down and will be unpleasant later. Mix the ground herbs with a few tablespoons of flour – this will be used to coat the liver before frying.

Slice your onion and add it to a frying pan containing hot olive oil (I use my rosemary and garlic infused oil, mentioned on August 24, 2010) – you want to caramelise your onions, so turn the heat down and cook them slowly while stirring to stop them burning. When the onions have caramelised stir in a little drop of Balsamic Vinegar, red wine vinegar will do but Balsamic is nicer, stir and remove from the pan to a warm dish in the oven (at a very low heat – less than 50º will do, since you don’t want them to dry out).

Next, in the same frying pan, fry the bacon – you will probably need to add a little more olive oil. Don’t cook the bacon to a crisp, since you will add it to the onions in the oven to keep warm and again you don’t want it to dry out.

Dip your calf’s liver in the seasoned flour, bring your frying pan back up to hot and add some more olive oil. The idea is to cook the liver quickly for a couple of minutes on both sides – it should be pink in the middle, but not bloody.

When the liver is cooked, keep it warm with your bacon and onions, add a little of the left over, seasoned flour to the remaining oil/juices in the pan. Stir well and add a spoon full of red wine vinegar and a glass of red wine. Reduce this and add a little butter to help thicken the sauce.

Serve your calf’s liver, bacon and onion, with a some mashed potato and peas – drizzle a little of your reduced sauce on top.

I cook this on a regular basis, but I’ve had great calf’s liver in a brilliant and cheap restaurant on the King’s Road, the Mona Lisa.

Calf’s liver is veal. The veal industry had a bad name in Europe a few years ago. Now, however, transporting animals in crates has been banned and in this country the calves are well looked after and get to eat normal food, i.e. they are not forced to drink milk only. This type of veal is called rose veal.

Veal is a byproduct of the dairy industry. Cows have to have a calf in order to produce milk. In general, female calves are raised to become milk cows and it’s the males which are use for veal. Until recently, because of a lack of interest in eating veal in Britain, most male calves were shot and buried. Fortunately, interest in eating veal has increased, due to awareness of good animal husbandry. I personally would like to show the calves some respect by eating them, after they have had a good (albeit short) 6 – 7 month life (which is longer than chicken or lamb), rather than see them shot and thrown away.