I went to birthday dinner at XO last night, in Belsize Village, in what used to be quite a tired old pub. I had expected the place to have been converted haphazardly into a gastro pub, but actually it’s a fully refitted restaurant.

XO is quite stylish with a dark interior – no candles on the tables and I had to use on-camera flash! Not my first choice by any means. I have to admit, I was confused by and worried about a “pan-Asian” menu, especially since all members of staff seemed European. Apparently “pan-Asian” is a fusion of Asian cuisine.

The food did turn out to be extremely good, the restaurant was packed and with quite stylish people, Tracey Thorn was at the table next to ours.

We had some edamame beans with chilli soy and mirin while we chatted – apparently, edamame beans are popular in China, Japan, Hawaii and Korea. The beans and sauce were just right – crisp and spicy. 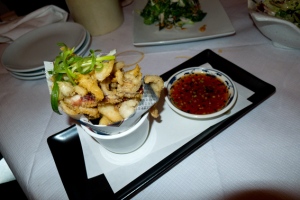 I had chilli salt squid as a starter, classified as dim sum – strange as it seems like a Vietnamese squid dish. The squid itself was light and crispy and the chilli sauce was hot and slightly sticky. I was impressed by the fact that the chilli burnt my throat, enough that I required a drink, in between mouthfuls, in order to be able to speak properly. Not everyone’s cup of tea perhaps, but I quite enjoyed the sensation.

As a main course I had a sashimi and sushi platter. As with most restaurants, there wasn’t nearly enough for my greedy stomach, but that’s always the way with raw fish. The fish was quite fresh, just the way it should be if you like it raw (unlike some of the conveyor belt restaurants in London, where the fish has been doing the rounds all day).

There is an up side to eating a small plate of fish and that’s desert. My first choice was passion fruit brulee, but sadly they’d run out. Instead I chose an excellent crumble (not on the web menu) with ginger ice cream.

We drank a delightful Sauvignon Blanc, from New Zealand, with our meal and I would have been equally happy with a bottle of sake.

The food and service at XO was exemplary. It’s a bit pricey, but I’d recommend it if you fancy a melange of oriental food and only have time to go to one restaurant. XO is at 29 Belsize Lane, London, NW3 5AS.