Oven Busters are actually short ribs of beef, the bones and meat above a regular rib of beef roast – also known as a Boxheater and in America they are called a Jacob’s ladder. The name Oven Buster comes from the fact that these short ribs are normally cooked for a long time at a very low heat and during the cooking they swell up, looking bigger when you take them out of the oven, than when you put them in. These are a cheap and delicious, old fashioned, cut of beef. You may have trouble finding them outside of a traditional butcher’s shop. They can come as a full ladder of ribs or individually. They taste a bit like the meat on an ox tail. 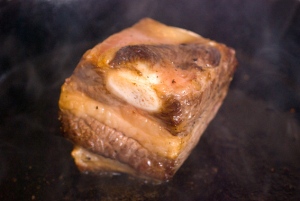 Chop and fry your vegetables in a cast iron casserole with the bacon, until they have taken some colour. In the meantime, brown your Oven Busters in a large cast iron frying pan. When browned, remove the Oven Busters to the casserole along with half a dessertspoonful of flour. Deglaze the frying pan with a glass of red wine and a splash of red wine vinegar. Add the deglaze to the casserole, along with the second glass of wine, a squirt of anchovy paste and the bouquet garni. Season with some black pepper, but hold back on the salt until it has cooked for a while, since the anchovy paste is quite salty. 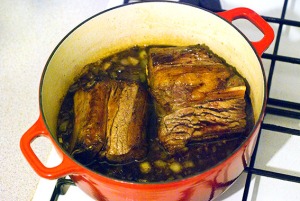 Bring the casserole to a simmering temperature, put the lid on and place it in a preheated oven at 120º C for a couple of hours.  After 2 – 3 hours, remove from the oven and adjust seasoning to taste. Serve with mashed potato and seasonal vegetables, such as Brussels sprouts. On cold days like today, add a little crushed chilli when frying the onions to add some extra heat to the dish.