Tayyabs is a family owned, Whitechapel restaurant, serving authentic Pakistani, Punjab food. It started as a daytime cafe, 30 years ago, before moving into an adjacent pub as a fully fledged, evening, restaurant.

Last night I went to Tayyabs with three friends – Simon has been there many times and somehow we breezed in, past a queue of ten people and straight to a table. Simon did go off to chat to Mr. Tayyab later, but it has occurred to me that the people queueing might have been waiting for a large table and the restaurant may have had a free table for four only. Tayyabs is very busy and all the reviews suggest booking. 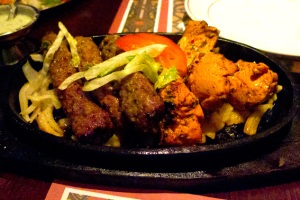 We were all very hungry and left Simon, our tour guide, to order for us. Our starters were, a delicious Masala white fish, coloured bright red with spices and the tandoor oven, Seekh Kababs and Tandoori Chicken. Everything was sizzling hot from the oven and the spices.

Next came a dazzling array of dishes and breads. The best meat dish was probably the Karahi Ghost – lamb cooked in a rich sauce of Garam Masala, tomatoes, chilli, turmeric, coriander, etc. I was completely blown away by the Tinda Masala – little baby pumpkins, cooked in a similar sauce to the above. When Simon ordered two plates of baby pumpkin, I thought he was mad, but on tasting the dish I’d have to say it was probably the best thing on the menu! All the food was excellent, the small prawns were noteworthy and the nan bread was light and crispy.

I didn’t have desert, but I did get to taste the Kulfi, which was so good I almost ordered one, however, after the huge feast, I thought better of it. Tayyabs is quite cheap, we paid £20 each, including a tip. It’s BYOB which means you can take your own drink – there’s a handy Tesco Metro on Whitechapel Road, just round the corner.