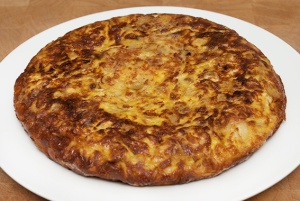 Tortilla is probably the Spanish national dish – the ingredients are cheap and easy to come by and the omelette itself is delicious. Tortilla can be served hot or cold as a main course, it can be chopped into little pieces as a tapa and it’s used as a sandwich filling when sliced. It’s a normal sight to see people going to work at 7am with a long bocadillo de tortilla, wrapped in aluminium foil – a bocadillo is a sandwich made with a baguette.

The most basic tortilla is made with just egg and fried potatoes, though on the whole, I’ve found onion and potato to be usual. However, you will find an amazing array of variations, with fillings such as, peppers, spinach, courgettes, jamón (ham), bacalao (salt cod), chorizo,  etc. It’s quite a skill in itself making a regular tortilla – getting a perfect layer of filling in the middle requires lots of practice.

I first had Tortilla Español about a month before I moved to Barcelona in 1991 – I was instantly impressed by the fat cake like thickness and texture, not to mention, the taste of garlic, onion and potato, bound together by beaten eggs. When I arrived in Spain, I discovered that making a tortilla that held together, was more difficult than I’d imagined. The onion and potatoes need to be cooked perfectly to get the right texture too – 10 minutes in a frying pan just doesn’t do it. I spent about 6 months watching every Spanish  person making tortilla I came across, in order to perfect a decent omelette.

The best tortillas take time to make – don’t rush it, or you’ll end up with something disappointing or a burnt wrist. Allow yourself a couple of hours if you want to make a good job of it – it’s worth it. 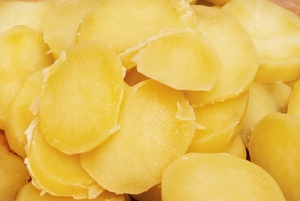 Tortillas need lots of lubrication (along with the chef), so add a generous amount of olive oil to the frying pan, warm the oil up a bit and add the chopped onions. The onions need to cook slowly and caramelise – that means the sugar in the onions is converted into caramel as they brown. This takes a while and must be done on a low heat with lots of stirring or the onions will burn (do not cover the pan). In the meantime, as long as you don’t forget the onions, you can peel the potatoes and beat the eggs in a large bowl.

Par boil the potatoes – with red ones, bringing them to the boil will suffice. Allow the potatoes to cool a little before slicing them – about a quarter of an inch thick. Fry the potatoes in olive oil (or goose fat if you have it) – a deep fat fryer is ideal and will save a little time. If you use olive oil, you can reuse it in the final tortilla frying process.

Add salt and pepper to your beaten eggs – I normally taste them to see if I’ve added enough. When the potatoes are golden brown, remove them from the pan and put them on some kitchen towel to dry them off a little and sprinkle on a little salt. After a minute or two add the potatoes to the beaten egg. When the onions have caramelised (they will reduce by about half), add the chopped garlic for the last couple of minutes of cooking, then add the onions and garlic to the egg mixture. Give it a good stir and allow to rest for 5 minutes. 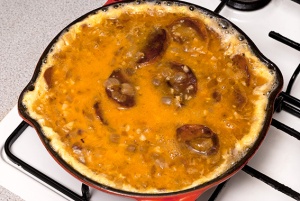 Heat a frying pan with a generous amount of olive oil until it’s quite hot and smokes – this is important, if the oil isn’t hot enough, the eggs won’t set properly. You will need a plate which is larger than the frying pan in order to flip and cook the tortilla – do make sure that the plate and frying pan fit well together or you could loose the mixture when you flip it, or worse, burn yourself. Pour the egg mixture into the hot frying pan, put the plate over the top and turn the cooker down to low. If you are using an electric cooker, you might be better off using two rings – one on low and one on high – electric doesn’t cool down quickly enough for one ring.

After a few minutes, you should smell the egg cooking and the edges of the tortilla should have formed – see my photo. Hold the plate tightly on top of the frying pan and flip the whole thing over (by the sink if you are nervous). While balancing the half cooked tortilla on the plate, get the frying pan back on the stove, turn the heat up, add a little olive oil and slide the mixture back into the frying pan. That’s the hard part over! Now turn the heat down and shake the pan to stop the tortilla sticking. You can flip the omelette several more times to achieve a slightly browned colour all over – it’s much easier after the first time as it will be solid. 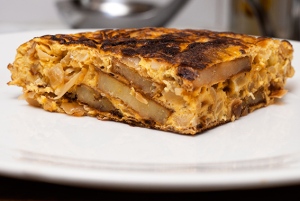 Tortilla is often served with salsa brava (a picante tomato sauce), allioli or mayonnaise. I have seen people cook the top of a tortilla under the grill if they are frightened of flipping it – I don’t think the taste is as good, to my mind it’s a little dry and burnt. The largest tortilla I’ve ever made had 28 eggs in it – I had to use a large chopping board in order to flip it!