I read a book called “Shark’s Fin and Sichuan Pepper“, by Fuchsia Dunlop a few years ago. The book tells Fuchsia’s story of living in Sichuan provence and becoming the first woman and westerner to enrol in the Sichuan cooking school. She made the food sound so delightful that I wanted to eat every page of the book, or at least every scrap of food mentioned.

I noticed Chilli Cool, a couple of months ago, walking past, en route to a friend’s house – the sign outside saying “Sichuan Cuisine” made me very interested, so I’ve been looking forward to trying the food. 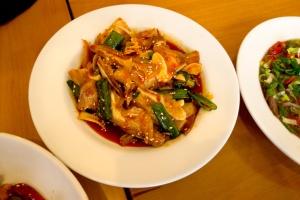 Sichuan cuisine is noted for being bold, pungent and spicy – I was expecting garlic, chilli, ginger and star anise. From Fuchsia Dunlop’s recipes and comments, I also expected some of those flavours to come from infused oils, notably those containing chilli.

So today I finally had lunch in Chilli Cool with a friend, Steve. The weather had gone cold again and Sichuan pepper sounded like just the thing to keep that cold away. We ordered a couple of starters, which arrived just after the main course, though perhaps our idea of starters coming first hasn’t translated to the menu properly – they might be considered side dishes. The starters were Five Spice Flavoured Beef and Sliced Pig’s Ears in Sesame Oil. Both dishes were cold dishes, something I hadn’t realised and since it was a cold day I was more interested in the hot food. However, the pig’s ears were particularly good, though chewy, as to be expected. I can’t fault the beef either, other than I wasn’t really in the mood for cold food.

The main dishes were exceptional – hot in temperature and chilli. The best dish was definitely Gong Hao Chilli Chicken with Peanuts – I could have snacked on this for hours. The chicken was marinated in Shaoxing rice wine and soy sauce, then fried with peanuts and a mountain of chillies. It did however manage to be succulent with a hint of sesame and spring onion (if only the Colonel could do this).

The Pig Intestine Noodles, proved to be almost as good as the chicken. The intestines themselves were cooked in what looked to be the entire harvest of many chilli plants, along side small pieces of brown tofu and spring onions. The only problem we encountered, was the fact that there was one huge 12 inch strand of untameable intestine which we couldn’t work out how to cut with chop sticks.

We also had a bowl of Chengdu Dan Dan noodles, so named after the capital of Sichuan provence. According to Fuchsia Dunlop, “Dan Dan noodles are the archetypal Chengdu street snack”, “Dan is the verb to carry on shoulder poles”, so these noodles were carried around by street vendors who shouted out, “Dan dan mian”. The noodles were very good but eclipsed by the pig intestines and chilli chicken.

Chilli Cool is at 15 Leigh Street, WC1H 9EW. I couldn’t help noticing that all the regulars were sharing huge bowls of noodles and I mean huge! That’s what I’m going to try next time… I’m writing this, quite a few hours later and the Sichuan Pepper has kept the cold out all day.