Jerusalem Artichokes are not actually artichokes and they don’t come from Jerusalem. They were brought back from America by the Frenchman Samuel de Champlain, in about 1605, who described them as having a taste like artichokes. The Jerusalem part is attributed to the word girasole, the Italian for sunflower, the plant family that they belong to. The part of the artichoke hat we eat is in fact a tuber which produces big yellow flowers. Whilst the Jerusalem Artichoke grows very well in cold climates, it will run wild if not carefully cultivated – the tubers degrade and it becomes more like a weed than a food crop. The season for these tubers is November to March, though the farmer at the farmers’ market still have some good ones this week. 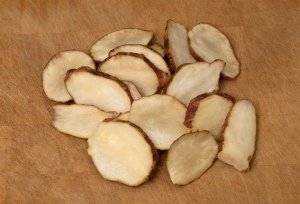 Jerusalem Artichokes can be cooked very much in the same way as potatoes (boiled, steamed, roasted, fried, sautéed, etc.). They are very good raw, in salads, too. The flavour could be described as slightly sweet and nutty and a little crunchy. When buying, make sure the tubers are firm – the will keep for several weeks in the fridge.

I particularly like Jerusalem Artichokes sautéed in olive oil. Slice them just before frying and cook in very hot oil on both sides, until golden brown. If preparing in advance, a little lemon juice in water will stop any discolouration – though they’ll need drying off before frying. Serve with fish or meat and a little salt and pepper.

Jerusalem Artichokes are very good for you, they contain iron, phosphorous, potassium, vitamin C and carbohydrate (inulin). Beware, there is a side effect to all the goodness and that’s wind!

In Germany, they produce an artichoke schnapps called Rossler and feed the tubers to their horses.