The octopus is a quite a popular food in many countries, though I suspect, not that common in Britain. For some reason sea creatures have to look attractive or we just don’t eat them here – 8 legs is far too similar to a Spider! Personally I’m quite fond of octopus – I’m not sure when I first had it, but I distinctly remember eating delicious pulpo gallego in Galicia on Portobello Road at some point in the 1980’s and I ate  quite a  few of them in Barcelona during the 90’s.

Octopuses (the original Greek plural) are cephalopod molluscs with 3 hearts. They can be quite easy to catch  – the centuries old, Mediterranean method, is to put a rack of pots into the sea at dusk and the octopuses climb into them to shelter!

I tried a Sardinian recipe for octopus with peas, a couple of years ago, but have fiddled around with it to give it more flavour. I’ve seen a few articles on the web which state that the easiest way to tenderise an octopus is to freeze it for a couple of days and I believe that’s what people do in Spain now, rather than going through the long boiling process – it certainly works, so the best way to buy could be pre frozen. I’ve tried to cook this when fresh peas are in season (I’m not a big fan of frozen, they are quite different), but for some reason octopuses seem scarce here at that time. I noticed the Angel fishmonger had some octopuses yesterday and he let me have two for a fiver – fresh peas are a few months away. 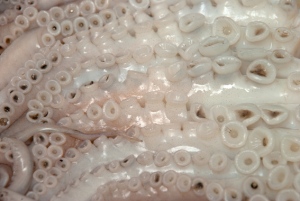 If you buy fresh octopus from a fishmonger, ask for it to be cleaned and the beak removed. If it’s frozen, it’s generally debeaked. if you have to remove the beak yourself, cut off all the legs, feel where the main solid part of the beak is inside the head and cut around the top, above the eyes, with a sharp knife. Only cut into the body (as opposed to slicing through), that way you can pull out most of the internal organs in one piece. The head is quite good to eat (not the organs) – if you turn it inside out, it’s easy to clean and remove any membranes. 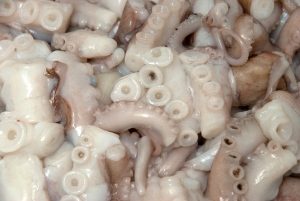 Heat some olive oil in a cast iron casserole and start by frying the onion – once it turns translucent, add the carrot and celery. Meanwhile, chop the octopuses into small chunks and when the vegetables have cooked for a few minutes, stir in the octopus pieces. Keep stirring for a minute before squeezing in the lemon juice and adding a little pepper, thyme, and a splash of vermouth. Put the lid on the casserole  – the octopuses pieces should turn pink within a few minutes and them you can transfer the dish to a preheated oven at 100º C for a couple of hours.

If you octopuses have been frozen, then they should be tender well within an hour and a half. If the octopuses are fresh then they may require cooking for as long as three hours. They will yield to a sharp knife when tender. The good news is, that if you cook this slowly in the oven it can be left unattended for a couple of hours and won’t burn.

When the octopus has tenderised, stir in the peas (the casserole can come back onto the hob as a low setting) – if the peas are fresh, they need five – ten minutes, frozen will only take about five minutes. When the peas are ready, stir in a little butter.

Serve with some good sour dough bread or better still, pan con tomate. I have a feeling that I’ll be including a sprinkle of chilli and possibly pieces of chorizo the next time I cook this – I’m sure the octopus will like it!