I spent most of last week making edible art biscuits with Catie (of the Outside World Gallery) for the Art Car Boot Fair. The boot fair itself is an annual event in Brick Lane Yard, featuring affordable art by British Artists, such as Tracy Emin, Gavin Turk, Pam Hogg, etc. 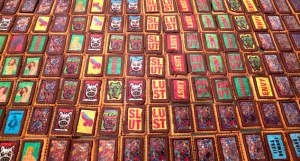 We made 240 biscuits featuring the work of recent Outside World exhibitors including; Julita Hernandez Adame, Kelly Davitt, C.A. Halpin and Tony Lee.

We sold the biscuits with a limited edition box or in a paper sleeve. 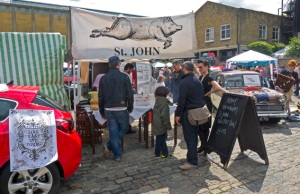 I was exhausted from late night biscuit making but felt somewhat restored by a St. John ox heart bun with pickled walnut relish and horseradish cream. I washed it down with a pint of real ale from the Southampton Arms stall. A second pint of beer made me hungry again, so I went back for more food. Apparently the ox heart was marinated in the walnut pickle over night.

By 4pm, the St. John had sold all 20 kilos of ox heart and moved on to Gloucester Old Spot bacon. 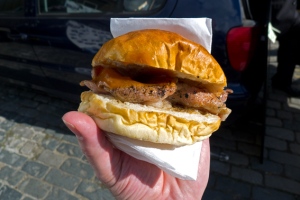 I’ve never had such good bacon, served in a bun with the St. John’s home made ketchup.

Christian Furr, an artist who paints cheese (on the stall next to us), generously offered us some cheese at the end of the show. His Soumaintrain, a cows milk, farmhouse cheese from Burgundy, had melted but tasted fantastic – it was rich and salty, with a pungent smell.

We all finished the day off by drinking a bit too much at the Golden Heart on Commercial Street.