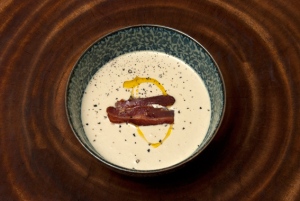 Ajoblanco is a refreshing Spanish soup, served cold. It’s sometimes referred to as white gazpacho or sopa de ajo (not to be confused with a hot sopa de ajo) and is typical of Andalusia and Extremadura. Almáchar in Málaga even has a festival dedicated to ajoblanco, every September 2nd. The soup itself is ancient, dating back to Roman Hispania and would definitely have been popular under Moorish rule. It’s thought that gazpacho may have originated by flavouring ajoblanco with tomato and other vegetables. 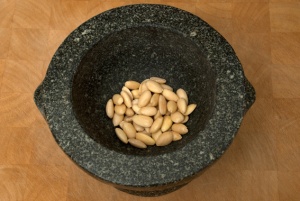 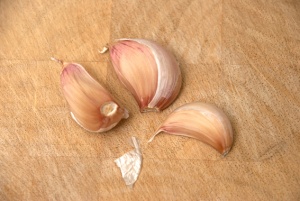 First, trim the crusts off a few slices of bread and tear it into rough pieces. Ajoblanco is normally made with white bread – I used brown sourdough, which is made with a mixture of white and brown flour, but the point of this kind of recipe is to use up stale bread and since my stale bread was brown sour dough, that’s what I used (fortunately it is quite pale looking and far tastier than white bread from a supermarket). 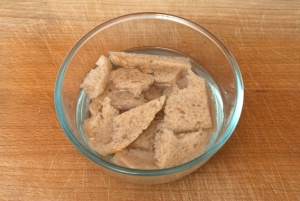 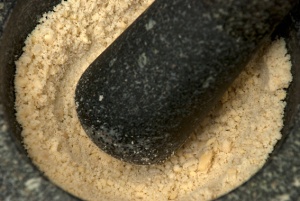 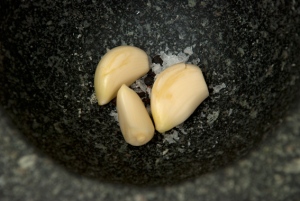 Once the almonds have been ground, bruise and peel the garlic and grind that with some coarse sea salt and a few black peppercorns. 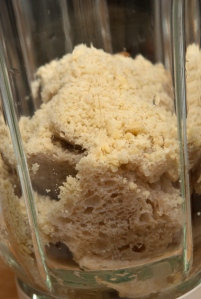 Put the bread, almonds and garlic into a blender with 2 dessertspoons of red wine vinegar. 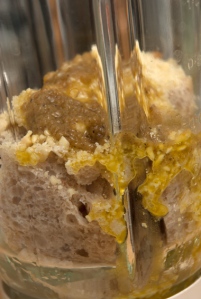 Start blending and drizzle the olive oil slowly through the top of the blender. It may seem like a lot of oil, but in Spain, olive oil isn’t just a medium for frying, it’s a main ingredient and flavour in its own right. 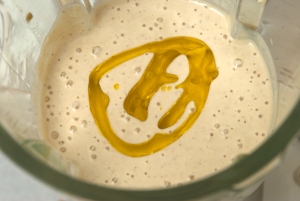 When the consistency is that of a thick white paste, slowly pour in about a quarter of a pint of water. Taste the ajoblanco and add some more vinegar or salt and pepper as necessary. Chill the ajoblanco before serving and stir in a little more water if you think it’s a bit too thick. 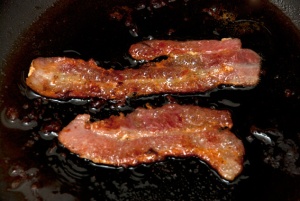 Traditionally, ajoblanco is served with grapes, figs or almonds, but I discovered that in Grànada it’s sometimes served with bacon and a baked potato, which suits me, since I’m not that keen on sweet things. 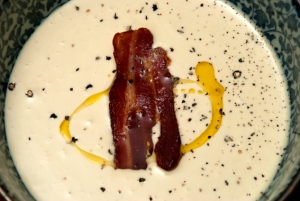 ajoblanco with bacon, black pepper and a drizzle of oil

My ajoblanco was also garnished with a drizzle of extra virgin olive oil and some cracked black pepper. I had a couple of slices of pan con tomate on the side. Beware of the calorific content – this is very good for you, but quite fattening!

Like gazpacho, ajoblanco is sometimes served in a glass.