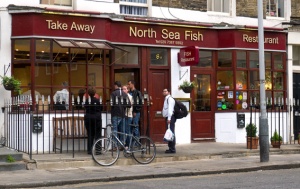 Four months later than intended, Oli and I finally got to the North Sea Fish and Chip shop! Back in May, we sat across the street, in the Norfolk Arms, watching a queue of hungry people buying fish and chips for supper. Just as we got hungry enough to join them, Hilary summoned us to the French House in Soho and some time, some how, later that night, we ended up eating Chinese food in the Far East. The crispy aromatic duck was very good, but slightly dissatisfying, I had a real fancy for fish and chips, having sat and watched the queue… 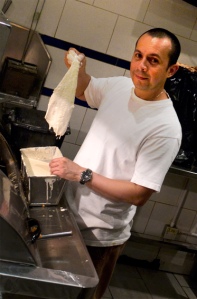 The idea was to eat in the restaurant, but a nostalgia for fish and chips in paper took us to the shop instead. We ordered two haddock, cod’s roe, fish cake and a mountain of chips.

The haddock was freshly battered and fried for us – it’s always better to wait, than have a crusty old piece of cooked fish that has sat warming for an hour (not that I’d expect anything like that in North Sea Fish). It was a lovely, fresh piece of fish in crunchy batter.

The crispy, golden chips were placed in a cone before wrapping in paper and of course they were sprinkled liberally with salt and vinegar.

The real star of the show was the fish cake – the one in front, above. It contained flakes of pink salmon and white fish in a crunchy batter – the salmon flavour really was the thing that made it great. I’m kicking myself now for not taking a picture of it cut in half! The cod’s roe, behind, was very good, but quite normal in comparison to the outstanding fish cake. I’ll be adding salmon to my home made fish cakes next time I make them.

North Sea Fish is at 7/8 Leigh Street, WC1H 9EW – I highly recommend it for real British fish and chips!

… and I almost forgot – we had some of their excellent homemade tartare sauce too.