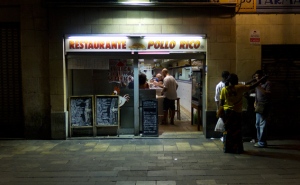 On Wednesday, I arrived in Barcelona to do a little work and enjoy some Catalan food and culture. Having lived here for several years in the 90’s, I have a real soft spot for the bars and restaurants, I used to frequent. 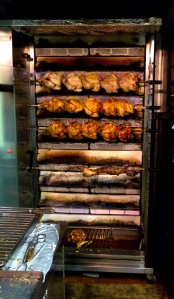 I walked past Pollo Rico lots of times before I visited for the first time. The rotisserie chicken and rabbit, in the window, looked and smelled enticing, but having come from London, I was frightened that it might be a Barcelona version of Kentucky Fried Chicken. I got brave one day and I’m really glad I did (it may have had something to do with having a girlfriend who lived opposite – the fantastic smell got too much to resist). 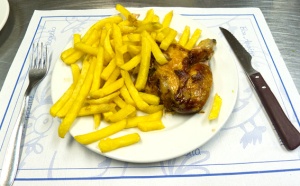 Pollo Rico is simple and unpretentious, customers sit at the long, stainless steel bar and their signature dish, chicken and chips is plonked on the plate! However, the chicken is the best I’ve ever tasted – I don’t know what they baste the meat with and they certainly won’t tell, but it’s chicken to die for. 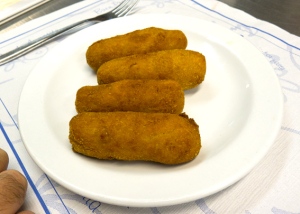 After quite a few drinks and a visit to a publishing launch, my friend Oli and I were starving (and we’d already had tapas elsewhere). We ordered chicken croquetas and 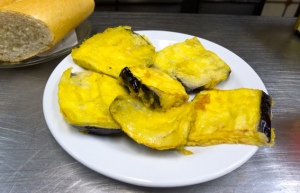 berenjenas fritas (fried aubergine, dipped in egg) as starters. I had the excellent chicken 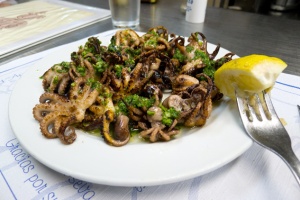 and Oli ordered baby octopuses cooked with garlic and parsley on the griddle as main courses.

It all tasted great – I felt like I was at home again.

August 29th, 2017 – sadly the owner of Pollo Rico has retired after 54 years and the restaurant has closed. Pollo Rico was an iconic locale and the epitome of popular restaurants in Barcelona, where most neighbours still met to eat or drink a beer.