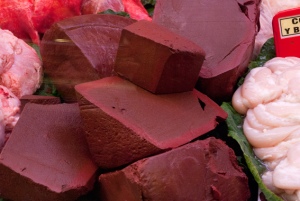 blood on sale in la boqueria

I’ve been looking at the blocks of calf’s blood, on sale in La Boqueria for years, wondering how they are used in cooking. Since I’m very partial to Morcilla (Spanish black pudding), I though I should bite the bullet and buy some. Of course that also meant I had to ask one of the ladies selling sang (Catalan for blood), how to cook it… 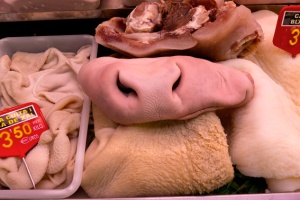 I found a stall selling veal offal – brains, feet, nose, tongue, tripe and blood – I’d been looking for a couple of days, for some reason they’d all been closed…

The stall holder was very friendly and helpful – I  asked if I should slice the block of blood and fry it in olive oil? The lady said I could, but she suggested that it was nicest chopped and cooked with onions and peppers. She also said it was good mashed with a fork and used as a thickener for stews.

half a pound of blood

I bought half a pound of blood for about 70 cents, thinking I’d fry a bit and then try the recipe idea.

In actual fact, it was a bit dull fried on its own – salt and pepper improved things a little, but it had the consistency of tofu and very little taste.

I chopped up the remaining blood and fried it with an onion. Morcilla de Burgos (black pudding) has quite a strong Moorish flavour, so I added a couple of teaspoons of cumin and pimenton, followed by a chopped green pepper (once the onions had become translucent). 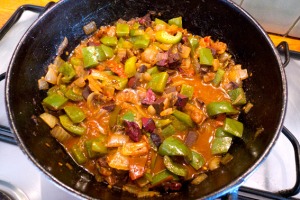 The flavour was still a bit lacking, so I added two chopped kumatoes (a dark green/red tomato variety, with a high fructose content known as Olmeca in Spain), two teaspoons of Balsamic Vinegar and half a pint of the duck, rabbit and turkey stock left over from Sunday. I sprinkled on salt and pepper and left the blood stew to simmer for 20 minutes, after which time it was really delicious!