I went to the Experimental Food Society Spectacular Exhibition, in Brick Lane, at the weekend. There were some very interesting things on show, but I was slightly disappointed that more than half the exhibition was devoted to food art and cakes – it struck me that there wasn’t much difference in these exhibits to the cakes of Jane Asher from 30 years ago.

There were, however, some odd and amusing things of note. Stefan Gates, famously a naked blond child on the cover of Houses of the Holy (by Led Zeppelin) and now a well known food writer and presenter, demonstrated his weird Snackbox. I confess to liking the look of the

cochineal bugs with marshmallows and cola bottles and

the pure gold and silver-wrapped sausages in clapshot. People were quite lucky that Stefan hadn’t included snot and toenails, as per his book Gastronaut!

I thought that the organic clothing, Emily Crane’s Cultivated Couture, was an outstanding idea – I assume that in an emergency one could eat one’s clothes, but it’s also occurred to me that the couture might breed in the wardrobe! 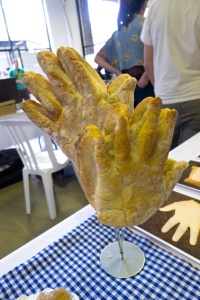 Sharon Baker casts parts of the body and then bakes them. 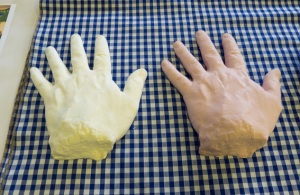 including casting her own body, eaten at the Thames festival – sadly not exhibited here.

There was some interesting baby food, including black pudding and anchovies – I believe the significance being that a baby indirectly eats the same as its mother. Odd, it reminded me that I didn’t like baby food as a child – in particular, apple purée.

I liked the hand panted, edible biscuits by ACMD Productions,

the idea being that, over the course of the day, 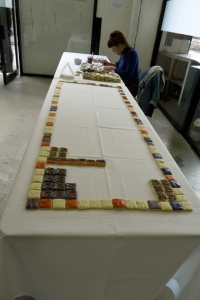 the biscuits would all join together 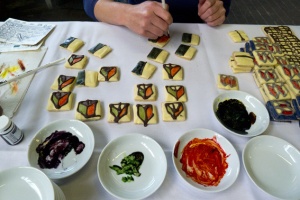 to make a single piece. I was reminded slightly, of my art biscuits at the Art Car Boot Fair in June. 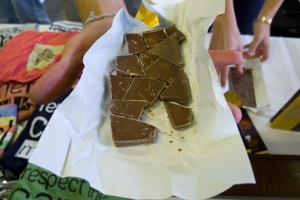 The chocolate is the first of its kind, produced by Al Nassma and coming from Dubai. 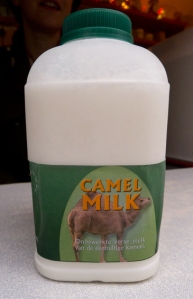 As if one camel product wasn’t enough, we found the 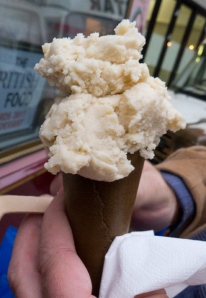 The roast banana and rum flavour, was deliciously creamy and reminded me of baked spiced banana.