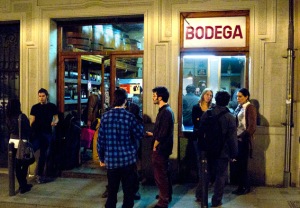 Another mission complete, collection of a lighting diffuser from Oli’s friend Claes, we thought another drink was in order…

Frank’s Bar, the short name for La Bodega d’en Frank Peterssein (named after a previous owner), is a fantastic old school Bodega – a combined wine bar and grocery store, once the back bone of the community, where one would go for bottled water, potatoes, cheese, ham, wine, beer, etc. Bodegas are also places for drinking and buying wine from the barrel to take home. Sadly these wonderful bars with ancient decor are becoming a thing of the past. I’m not sure that Frank’s Bar still sells shopping and the barrels look to be out of commission, but the interior is otherwise unspoilt. It reminds me of the wonderful Bodega on the corner of my old street (C/ Milans), which, to my disappointment, has made way for a hairdressers shop. 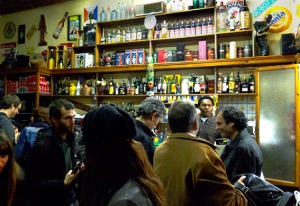 Frank’s Bar, notably, sells its own brand of Vermouth (a drink which is making a big comeback in Barcelona) and Estrella Galicia beer. Oddly they only sell red or white wine, though it’s not the only bar which doesn’t sell Rosado (some bars and restaurants just don’t). Like most Spanish bars, Frank’s also sells bar food, such as Manchego (cheese), tortilla (Spanish omelette), bocadillos (sandwiches), etc. The atmosphere easily makes up for the lack of Rosado and apparently, if you order the Manchego, they’ll give you more than you can eat!