Eat Meat and Olimax invite you to participate in an all day mass portrait event, Homage to Catalonia, on 26th November, for a forthcoming exhibition and book. You, the subject, are asked to bring a relevant item, to be included in your portrait, that represents Catalonia or Barcelona to you. Be imaginative with the theme as this performance is, most importantly, a collaboration between you and the artist.
British tapas and local colour all day. 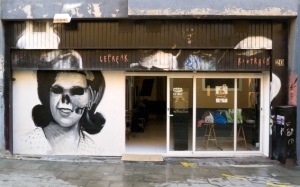 We’d spent the last couple of days (in between eating and drinking), 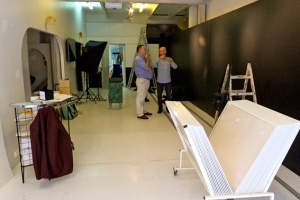 setting up a makeshift photographic studio inside the Eat Meat Gallery, for a one day shoot.

Katy and Rai, of Eat Meat, gave us a tremendous amount of support, encouragement and insight into Catalan culture. Anyone who made the effort to come could participate as long as they’d brought something of relevance to them and Cataluña. 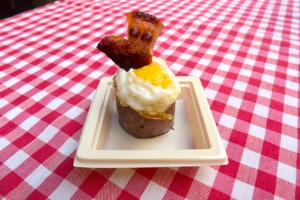 Chefs Alfredo and Zim slaved away in a back storage area producing British tapas. DJ Lou Young played some mellow tunes to keep us all calm and Matthew handled crowd control, while Oli looked serious and took pictures.

I think the English Breakfast was Alfredo’s concept – a slice of sausage (Butifarra), with a fried quail’s egg and two little pieces of bacon.

Variations on the theme came with baked beans and half cherry tomatoes. 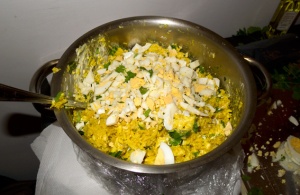 The Kedgeree was finished off, by adding hard boiled eggs, Crème Fraiche and Coriander. 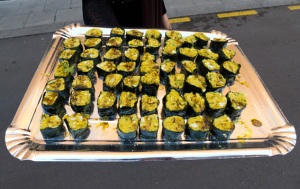 To turn Kedgeree into tapas, it was rolled in seaweed, like Japanese sushi.

The chefs carved up the rare beef and

heated up previously made Yorkshire Puddings on the griddle.

The beef and Yorkshires were combined 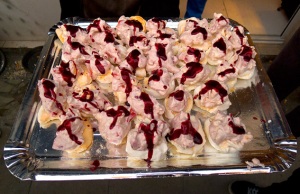 Zim had made little Meringues, the night before, in order to create mini Eton Mess puddings.

Late in the day, one of the Homage participants brought a long string of hand made Butifarra – a popular Catalan sausage (sported here by Alfredo). 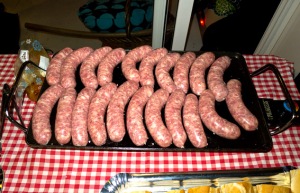 The Butifarra were generously donated to the cause – they’d already been photographed for the book. I was really looking forward to trying these special artisanal sausages but, having snagged the last one, a mother and hungry child looked imploringly at me… so I gave it up for another glass of Catalan black wine (vi negre).

It seemed like a good day was had by all. More than 100 people came to be photographed and we noted that the Catalan participants had really engaged with the theme, probably due to a strong desire for independence from Spain and their own sense of Catalan national identity. The number of  collaborators exceeded that of previous one day book shoots in London and included all age groups. Rai was delighted when the Catalan radio station phoned and interviewed him regarding the event, during the afternoon.

Once the photographs have been artistically edited and retouched, a book will be produced and launched with an exhibition at the Eat Meat Gallery – in April 2012.

Having completed our mission, we retreated to Iposa for a welcome sit down, Spanish tapas and a few glasses of Rosado.

22 Responses to Homage to Cataluña