Slow cooking Gammon in Mulled Wine produces a ham which tastes and smells like Christmas. It’s deceptively simple and if you buy a gammon knuckle or two from the butcher, it’s very cheap.

My butcher sells gammon knuckles for about £2.20, or you could spend 3 times as much for a similar sized gammon joint in a supermarket. I think there’s more flavour in a knuckle, since it contains a bone. If you have a large enough cast iron casserole, this recipe will cook 3 gammon knuckles at the same time (I know, I did about 20 of them last year as Christmas presents). This year I tried it with a smoked knuckle, last year I used unsmoked.

Gammon is cured pork, like bacon. It has been brined and contains a lot of salt. Therefore, some of the salt needs to be removed or the ham will taste too salty – there are two simple ways of doing this. Firstly one can soak the gammon in clean water overnight and then rinse it, or secondly (the quick way), put the gammon in a large saucepan of water, bring it almost to the boil, rinse the gammon and discard the water. 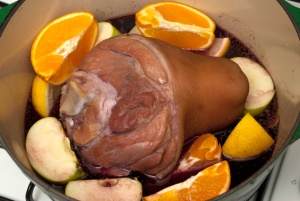 I did it the quick way and cleaned the saucepan, before returning the gammon and adding the wine, fruit and spices. The ingredients are fairly common to Mulled Wine, my only exception is that I don’t add any sugar, though that would probably work too.

Heat the contents of the pan on top of the stove and bring it to almost simmering – do not let it boil! Once the wine is hot, put the lid on the saucepan or casserole and put it into a preheated oven at 100º C. Cook the ham gently for 8 hours, turning every hour. The long slow cook makes the meat very tender and the fruit starts to dissolve. Once the ham is cooked, remove it from the liquid and allow it to cool down before refrigerating.

This can also be poached very gently on the stove or in a slow cooker.

I have wondered about using the leftover wine/stock for something, but it tasted so salty that I threw it away. The ham on the other hand is one of the nicest I have ever eaten. After all that cooking time, I don’t think I can tell the difference between smoked or unsmoked, but it was worth trying, just in case.

5 Responses to Gammon in Mulled Wine