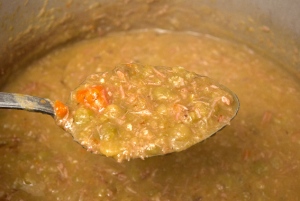 Pea soup is generally cooked or served with ham and made from dried split peas. The soup’s origins go back to at least 500 B.C. Both the Greeks and Romans cultivated peas and the soup itself is mentioned in “the Birds”, by Aristophanes.

Ham and Pea Soup used to be a staple food in Britain, since it was very cheap and full of protein. It would have been a common food for sailors, since dried peas and salt pork keep for a long time. Today it makes a very cheap and hearty winter warmer. I got the gammon knuckle from the butcher for £2.20 and 2 lb dried split peas from the Bumblebee for £1.40.

I had a motive for making Ham and Pea Soup – I made a couple of Mulled Wine Hams for  Christmas and had one left over. It had been cooked two weeks previously and I didn’t want it to go off, so making soup with it seemed like an excellent idea. If you are making this with an uncooked gammon, then follow these simple instructions:

Put the gammon into a large saucepan and cover it in water. Bring the pan just to boiling, discard the water and rinse the ham. Put the ham back into the cleaned pan, add a large onion, 6 pieces of garlic, 3 sticks of celery, 2 carrots, a bouquet garni and water to just cover the ham. A few black peppercorns can also be added, but do not use salt as the gammon will be salty enough already. Cook gently for 2 – 3 hours. Remove the gammon, reserve the stock, and throw away the herbs and vegetables.

Since my gammon knuckle was already cooked, I cut the meat off the bone and put the bone and fat into a pressure cooker, with the same herbs and vegetables as above. I wanted about 2 pints of stock, so added a bit more than 2 pints of cold water and cooked the lot under pressure for 20 minutes.

Once cooked, I strained the stock and threw away the bone, fat, herbs and vegetables.

There’s no need to soak split peas, the cooking time should be about 35 minutes in a regular saucepan or 12 minutes in a pressure cooker. 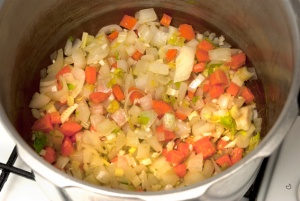 Put a little olive oil into the pressure cooker and cook the onions until they are translucent before stirring in the carrots, celery and garlic. Once all the vegetables have been slightly softened, 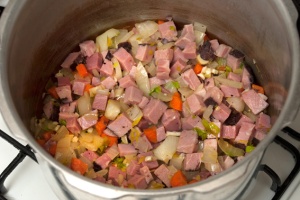 and then the peas. 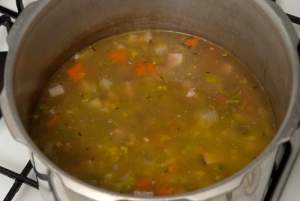 Pour on the 2 pints of ham stock and sprinkle on a little black pepper. Put the lid on the pressure cooker, bring to pressure and cook for about 12 minutes. 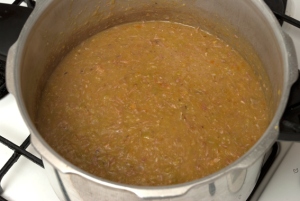 The soup should look like the above picture, but if it’s not thick enough, as long as the peas taste tender, you can blend it if necessary. If you cook the soup beforehand, it will thicken noticeably when you warm it up again – you have to take care not to burn the bottom.

I didn’t add any salt – even if you like a lot of salt, I suggest you cook the soup and taste it before adding any, since the ham will provide a salty flavour.

11 Responses to Ham and Pea Soup