On Friday it was Oli’s birthday, so a big group of us went to see La Soirée at the Roundhouse. On Saturday it was time for a group drink and supper, so we went to the Coach and Horses in Soho, followed by Lorelei for pizzas.

Lorelei has been one of my favourite places in Soho, since I first visited with friends in 1980. It’s an old fashioned Italian coffee bar and pizzeria which hasn’t changed since it opened (probably in the 1950’s or 60’s). I found a comment on the web where a man stated he’d met his girlfriend and future wife there in 1965 and that the place is exactly the same today as it was then (apart from a now missing juke box). 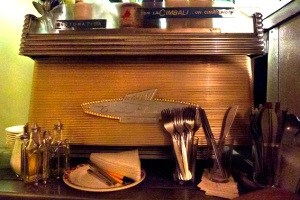 Lorelei is quite compact – I would imagine it can just about seat 35 people if they are all good friends. There are always a couple of sacs of flour by the doorway (the main ingredient in pizza dough) and the tables are made of formica. Just behind the seating area, there’s a small kitchen, hidden behind a beautiful old espresso machine (still in use). There are two quaint toilets, you go down a little corridor by the kitchen and then outside into a yard. There really are very few places like this left in Soho or London.

I shared some very good garlic bread as a pre starter,

then Oli found avocado prawn cocktail on the menu – I had to have one of those too! 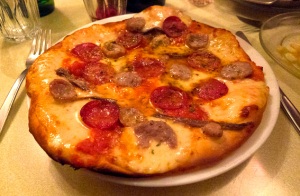 I had a San Domenico pizza (anchovies, garlic, mozzarella, oregano, parmesan and tomatoes – I had some extra Italian sausage added to that too) and Lorelei’s matchstick fries. On nights when I don’t fancy pizza, I order the lasagne, which is excellent!

Lorelei might not make the best pizzas in London (though they are better than the pizza chains), but it does make up for that with charm and reasonable prices – it’s BYOB, so two courses can cost as little as £10. There are mini Sainsbury’s and Tesco’s nearby, quite handy for buying wine and beer. The couple who own it are extremely charming and go out of their way for customers. I’ve gone in there late at night and found them sitting reading newspapers, waiting just in case one of the regulars is hungry.

We left at about midnight (there seemed to have been rather a lot of empty bottles on our table), just in time for the last hour at Blacks and a chance meeting with Scarlett Johansson.