My friend Oli was over from Barcelona for a week and arrived with half a foie gras. While here, he went up to Yorkshire to visit his mum –

on returning, he had a saddle of venison 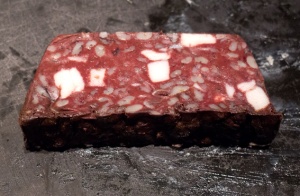 and some award winning black pudding from Huttons of Knaresborough (there’s a fantastic picture of their shop window at Christmas here). It seemed like a perfect excuse to cook a big dinner for friends…

You place the bones onto an oiled oven tray, sprinkled with a little salt (Malden is a good choice) and then roast in a hot, preheated oven for 20 – 30 minutes. Be careful not to let the bones burn. 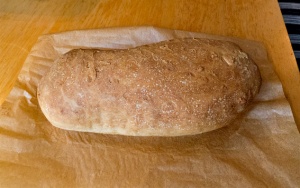 The bone marrow should be scooped out while still hot, and eaten on toast – Rick baked the bread specially. 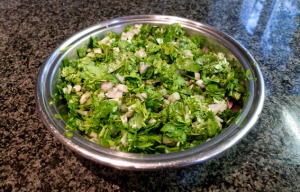 As per Fergus Henderson’s recommendation, I made up a little side salad – I deviated by using 2 pieces of finely chopped garlic and coriander instead of parsley, with a couple of chopped shallots, 2 teaspoons of capers, a squeeze of lemon and some extra virgin olive oil, seasoned to taste. This salad goes very well with the bone marrow – the flavours are complimentary. The marrow seemed to disappear very quickly – I’d been hoping to eat a few extra! 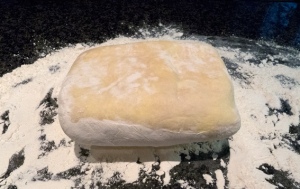 I think Oli suggested venison en croûte  (I’d had it before, a couple of years ago in Blacks), so I looked up a few recipes – one by Jane Grigson stood out, as did this other one with haggis! I also found a very good rough puff pastry recipe by Valentine Warner, which I followed to the letter (pictured above). Where it calls for a tablespoonful of lemon juice, I used my remaining half lemon grown by Chica Andaluza for something extra special – they are amazing lemons! I made the pastry the day before, so that it had a night in the fridge to rest… 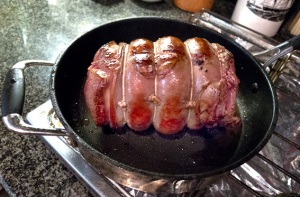 For the venison en croûte, we threw away the recipe book and made it up as we went along. I browned and seasoned the venison in a little olive oil quickly on top of the stove and let it rest.

Meanwhile, I rolled out the puff pastry – I had intended cutting it into two rectangles, but it seemed such a good size for a single pastry enclosure, that I left it as it was.

saddle of venison and foie gras

It was decided that the venison should be unrolled and stuffed with the foie gras and a few juniper berries,

then re rolled and placed on a bed of black pudding inside the pastry.

sealing the venison in pastry

I sealed the venison, foie gras and black pudding in pastry with some beaten egg – a bit like making a very large pasty. 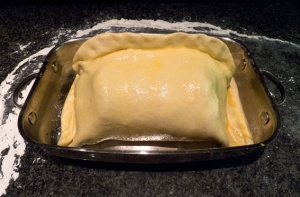 I coated the pastry with the remaining beaten egg to help it go golden brown in the oven. The venison en croûte was cooked in a hot oven for 45 minutes  and then rested for 20 minutes (this produces rare, bloody venison, so cook it for 10 to 15 minutes longer if you like medium rare). Do remember that venison should not be overcooked or it will go tough.

While the venison cooked, parsnips were peeled

Aubergines were sliced, salted and griddled.

Rabina brought Preiselbären jam – normally served in Germany with roast venison. It traditionally contains Lingonberries but this one was a little different. It was made with: cranberries, dried mango, brown sugar and red chilli flakes cooked in orange, mango and passion fruit juice – when the cranberries popped, a little touch of salt and lemon rind were added.

The venison was sliced and I whisked the juices off to the pan I’d browned the joint in,

along with the reserved venison blood, some red wine and balsamic vinegar, to make a quick jus. The venison was delicious, very tender and the flavours of foie gras and black pudding went very well together. The pastry was a delight and I urge everyone to make their own and give up frozen shop bought rubbish – it’s not hard to make.

santiago fresh from the oven

Su had been very busy during the afternoon – she whipped up a Tarta de Santiago, which came without almonds, since the nuts in the cupboard turned out to be hazelnuts!

The Santiago was decorated traditionally with the cross of St. James in icing sugar. It’s believed that the tarta may have its origins in Jewish passover cake, via Spanish Jews who converted to Christianity in Galicia. How fitting to be eating it in Golders Green! The Santiago was sliced and served with a little Pedro Ximenez, sweet sherry, poured on top.

Finally, a balloon went up to celebrate the end of a lovely evening.