We were up at the Eat Meat Gallery in Gràcia today and being a bit pushed for time went for for a quick lunch at Virreina Bar. The bar is situated in Plaça Virreina, a quiet square with has a beautiful old church, St. Joan de Gràcia. Apparently the church was originally built as a palace and converted in 1878. There’s a replica of the original palace on the Ramblas, Palacio de la Virreina in Cuitat Villa. 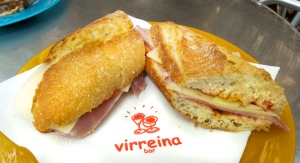 I keep coming back to Barcelona for the sophisticated restaurants and culture, but there are simpler pleasures to be had in things like a well made bocadillo de jamón y queso. This is not just a ham and  cheese baguette, for starters it’s great bread – look at the texture inside and shine on the crust. After slicing the bread, the interior is rubbed with tomato and drizzled with a little olive oil. It’s worth noting that a good bar will make a bocadillo on demand – this wasn’t siting around for hours going soggy, waiting for me to walk in…

Do try this at home! Slice a tomato in half (across the core) and squeeze the contents into a sliced baguette (both sides). For the adventurous, rub some raw garlic into the bread before adding tomato. Drizzle on a little extra virgin olive oil, with a pinch of salt and cracked black pepper. Add a slice of Jamón York (the same as English cooked ham) and some Manchego cheese (you could substitute cheddar). An equally popular sandwich would be, de Tortilla Español (with sliced Spanish omelette).