… finally, we got to the Eat Meat Gallery at about 4.30pm for the opening and book launch.

On November 26th, Olimax staged a one day mass portraiture even at the Eat Meat Gallery, Barcelona, on the theme “Homage to Cataluña”. The outcome was 100 digital artworks, all created on that single day.

George Orwell’s “Homage to Catalonia”, invokes an Englishman trying to come to terms with the contradictions within the culture and people of Cataluña and it’s in this spirit that the theme for the book and show was chosen.

god save the queen

As it’s (coincidentally) the Queen’s birthday, Oli paid a special tribute to the Sex Pistols.

I was knocked out by how good the gallery looked – I’d been in the kitchen all day yesterday cooking the food, the last time I’d been at the gallery was two days ago. Rai, Katy, Oli and Matthew had done a great job!

As well as the majority of the images being in frames, there were a couple of 3D pictures – reflections in mirrored tubes.

From a little cupboard room at the back, I set about preparing the food. The photo pork bellies went out on display 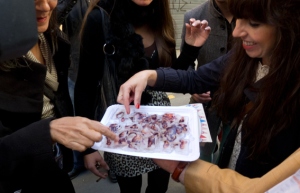 and I chopped up the gin and tonic photo jellies which were handed round to guests. 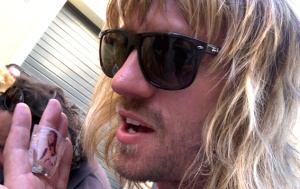 Quite a few people ate their own likeness. 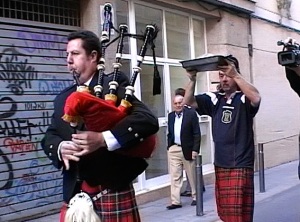 piping in the haggis

Somehow, as part of the culinary entertainment, we included Lindsay Kennard addressing a haggis, complete with a Catalan bagpiper! 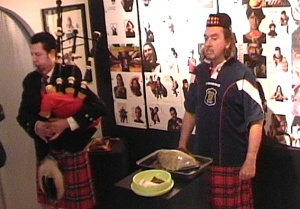 solemn address to a haggis

Strictly speaking this is normally done each year on Burns Night (January 25th), but Oli was keen for Lindsay to do it and it made for a great spectacle. 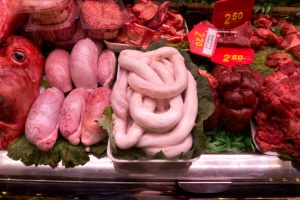 You’ll notice a little green bowl in front of the haggis address picture – Lindsay phoned us yesterday and asked for some, liver, offal and tripe to throw at people during the haggis address (how could we refuse). While buying the liver and tripe this morning, a woman next to us was buying veal penis. I asked how it was cooked and was told that it’s very good cooked like chicken soup (one of these days I’ll make some – you know I will). Anyhow, we bought a piece of penis as the unspecified offal.

My fantastic London butchers (Theobalds) went to great lengths in order to find us a Macsweens Chieftain Haggis, these giant 8lb haggises are only produced around the time of Christmas and Burns Night – it’s likely that Grahame found the only Chieftan haggis in England. 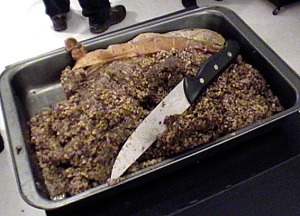 Lindsay did such an enthusiastic job of stabbing the haggis to cut it open, that he cut 3 big holes in the bottom of the tray!

The haggis was served on little slices of bread and washed down with Scotch Whisky. The Catalan appraisal of haggis was very good – most people came back for more and loved the taste (Oscar even took some home for his girlfriend). A few people commented on a similarity to a Catalan dish called Chireta.

Next up came the first public showing of the film – All i Oli – Homage to Catalunya.
I handed out truffle flavoured popcorn, easily made by sprinkling truffle oil on fresh, hot popcorn.

I was grateful to have the guests occupied by the movie for 20 minutes, it gave me a chance to get on with carving the roast beef that I’d cooked yesterday.

I cut the beef into small slices and added a piece each to 80 mini Yorkshire Puddings, along with a dollop of crème fraiche mixed with horseradish sauce. We’d done these “English tapas” for the shoot in November and they’d proved to be very popular. This time was no different – the roast beef didn’t last long!

The evening went very well, even tucked away in the broom cupboard I’d managed to drink a few glasses of Catalan black wine (vi negre). The gallery closed, somewhat reluctantly, at about 10.30.

A group of us walked down through Gracia, buying beer from street sellers, en route for Cuitat Vella. We got cabs to Barrio Gotico from Diagonal and found a Basque bar which was just closing – they were, however, happy for us to come in a buy a couple of rounds of drinks. We drank several glasses of Patxaran each (a popular sloe liqueur from Pays Basque) and a Spanish bar customer picked up a guitar and started to play Flamenco. He was very good and to my mind, this kind of impromptu playing (from the heart) is far more enjoyable than paid concerts to tourists.

The Basque bar did close eventually, so we moved on – I have a distinct memory of crossing the Ramblas and Jonas buying us all beer from another street seller, who produced the cans from a manhole leading to the sewer! They hide their wares, because if the police catch them, everything gets confiscated.

We ended the night at Betty Ford’s bar on Joaquin Costa – most apt!

The All i Oli – A Homage to Catalunya book is available from Amazon.

The All i Oli – A Homage to Cataluya film (Catalan subtitles) can be seen here.

32 Responses to Homage to Cataluña – Expo