To celebrate the success of Saturday’s Expo and to spend time with a group of friends who’d come over from London for the show, we went to La Mar Salada for lunch en mass. 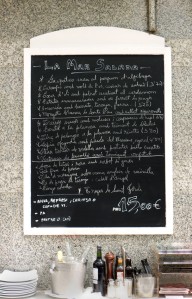 Anyone who’s a regular reader of the blog will notice that I’ve been here twice before, but the food is so good, not to mention beautiful, that it’s always worth a mention. The weekly lunchtime menu is available here and they even translate it into English! La Mar Salada is an award winning restaurant in Barceloneta, coming highly recommended by Time Out. In the evening the menu can be quite expensive, but at lunchtime they have a three course 15 € menu which includes a glass of wine. 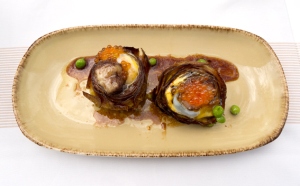 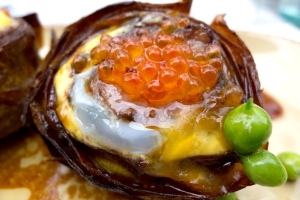 (artichokes with bone marrow, salmon caviar, poached quail egg and gravy) for my starter. When it arrived I realise that almost the whole of our 15 person table had ordered the same. This was without a doubt the most amazing thing I’ve ever had here, or perhaps anywhere. The roasted baby artichokes contained a poached quail’s egg, topped with bone marrow and salmon roe. The combined flavour combination, was deliciously rich and creamy. In particular a fork full of poached egg yolk and bone marrow was exquisite!

As my main course I had Lluç de palangre a la planxa amb risotto d’Idiazabal, espàrrecs bladers i vinagreta de tinta (hake cooked on a griddle with idiazabal cheese risotto, wild asparagus and ink vinaigrette). A lovely piece of hake with crispy skin on a bed of delicious creamy risotto with little pieces of wild asparagus. 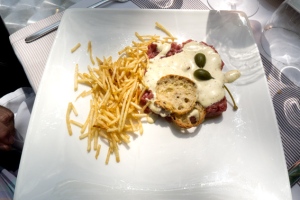 Then Groucho let me taste his Steak tartar de vedella amb patates palla, encortits i vinagreta de mostassa (veal steak tartare with straw potatoes, pickles and mustard vinaigrette) – it just melted in the mouth and I was torn between mine and his. Eight or nine hours later, at Iposa (which was far to dark to photograph), I had some steak tartare. I was compelled to have it after tasting this veal tartare at lunch. The normal steak tartare was very good, but not quite as good as the veal here. 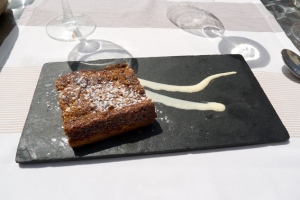 For pudding I had Pa de pessic de taronja i cabell d’àngel (orange and candied spaghetti squash cake), which was sublime.

Groucho had Sopa de litxi i rosa amb sorbet de gerds (lychee and rose soup with raspberry sorbet). I got to taste this one too and it was quite extraordinary. I had a spoonful of the sorbet with some soup and initially tasted rose and lychee, followed by a separate taste of raspberry a few seconds later. I love that kind of subtlety!

Yet another excellent lunch! I highly recommend this restaurant.