Like England, Cataluña’s patron saint is St. George (Sant Jordi). On La Dia de Sant Jordi, the people of Barcelona fly the flag of St. George and the day’s become synonymous with books, roses and love. In 1923 an enterprising bookseller connected St. George’s day with the day that both Cervantes and Shakespeare died and it’s become National Book Day – now World Book Day, since UNESCO adopted it in 1995.

St. George’s day is also known as El dia de la Rosa, the most romantic day of the year (akin to Valentine’s Day), because the St. George legend says he slew a dragon to save a princess and where the dragon’s blood fell, a rosebush sprouted. St. George picked a red rose from the rosebush and gave it to the princess. In Barcelona, the men give their girlfriends a rose and the women give their boyfriends a book. The whole of the Ramblas (the main thoroughfare through the old city) is closed to traffic, hundreds of rose and book stalls line the streets and the romantics are out in force. It’s almost impossible to cross the Ramblas due to the crowds or get into the Metro station at Plaça Cataluña. 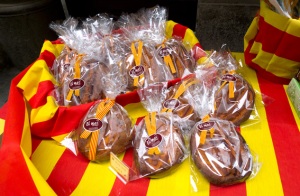 I was delighted to come across some St. George’s Bread (Pa St. Jordi), it’s made with Sobrassada (a Balearic/Catalan cured sausage made with pork, pimentón and black pepper – it reminds me a bit of cured chorizo) and cheese. When sliced the bread should resemble the Catalan flag, four red bands on a yellow background. It tastes very good, a bit like a savoury brioche.

We went up to the Eat Meat Gallery (who had their own romantic art book stall), for a second showing of the Homage to Cataluña film.

Getting into the spirit of St. George’s day, I mixed up a new batch of photo jelly,

but this time with gin and rose essence. 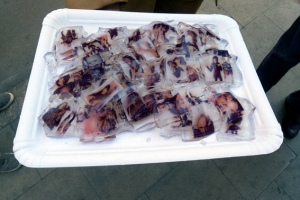 Once again the jellies seemed popular.

During the afternoon, we’d come across someone, who I think was homeless, but who’d nevertheless risen to the occasion. He’d made a brilliant cross of Sant Jordi out of red Estrella beer cans (outside the church of Santa Maria del Mar). In spirit he would have fitted into the Homage to Cataluña photo shoot and book, perfectly – I couldn’t help wishing he’d been there!