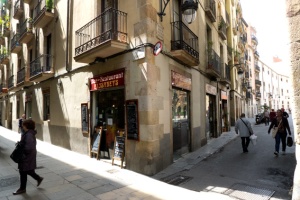 On my last day in Barcelona, I had lunch with Oli and Dorian in Elisabets, a small restaurant bar in the corner of Barrio Chino (close to Plaça Cataluña). 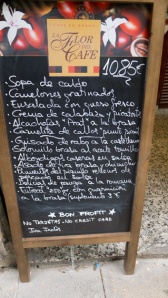 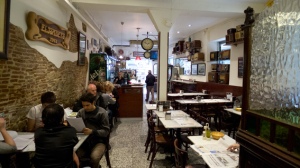 Elisabets has a long thin bar at the front, with tables laid out for lunch at the back. They have a large collection of old valve radios on shelves throughout the bar/restaurant area.

I was highly amused when Dorian asked about the vegetarian options on the menu – the waitress pulled a very sour face and said that there were a couple of options without meat, if he liked that kind of thing! This isn’t an unusual response – older people in Barcelona remember a time, under Franco’s regime, when there wasn’t enough food to go round. In those days meat was such a luxury that one couldn’t turn it down. Times have changed considerably though and these days there are young Spanish vegetarians – lately a few vegetarian restaurants have opened up too. 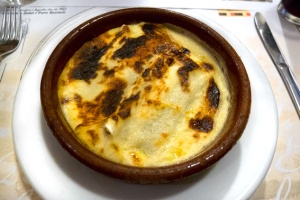 I ordered the canelones gratinados – cannelloni stuffed with a meat sauce, covered with béchamel an baked in the oven. They were excellent! 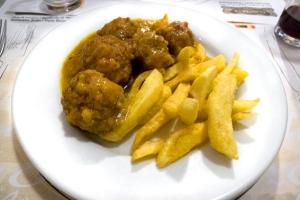 As my main course I ordered albóndigas caseras en salsa – home made meatballs in sauce.   The sauce and meatballs were deliciously rich, I believe they were pork but they could have had veal mixed in there too.

Finally I had mel i mato – one of my Catalan favourites, a ricotta like cheese drizzled with honey. I don’t think you can go wrong with this pudding.

I thoroughly recommend Elisabets, it’s a genuine old school Catalan bar and restaurant, serving hearty food. My lunch came with a chilled half bottle of vi negre (red wine). Beware, the menu is in Catalan and they don’t speak English. By the end of the meal I was ready for a little sleep on the plane back to England…