My friend Simon Tyszko asked me to cook for his birthday party, at his studio in Battersea (previously a school science lab).

We considered wok cooking over a gas powered water feature,

but the flame wasn’t hot enough and it would have taken too much time to get it working properly. 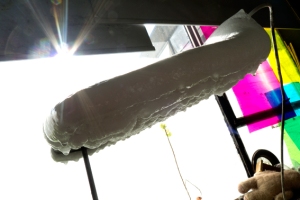 The ice chair did hold some possibilities too..

but finally, a barbecue seemed the sensible option. 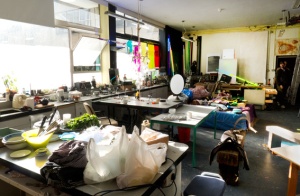 I mixed up an interesting cauliflower salad on the science bench above, using sliced cauliflower florets, chopped onion, red and yellow peppers, coriander leaves, a little mint, olives, olive oil, garlic, a sprinkle of crushed chilli and the juice of a lime. Heidi made a lovely tomato salad with basil and olive oil and Xavier brought some tabbouleh. In the melee of getting the barbecue hot and preparing lots of fish, I forgot to photograph the salad and a super fuerte allioli (recipe here). 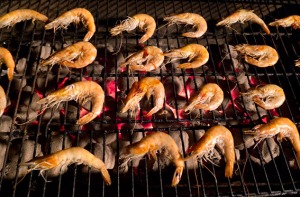 The first course was prawns – they cooked in a few minutes on the barbecue and were served brushed with garlic infused olive oil and the allioli. 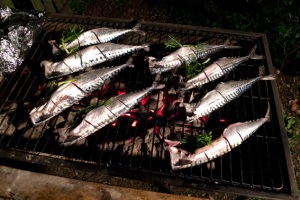 Mackerel followed the prawns, with a little fennel and garlic olive oil for flavour.

To the left of the mackerel were a couple of parcels of asparagus with the garlic oil, wrapped in aluminium foil. This is an excellent way of cooking asparagus – it took between 5 – 10 minutes and beats boiling or steaming on a hob for tenderness and flavour. I also cooked some sliced fennel this way, which took about 20 minutes before it became tender – by that time it had started to caramelise and tasted amazing. 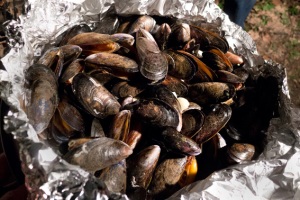 Cosmo found some butter to add flavour to a kilo of mussels, again steamed in foil and then last of all… 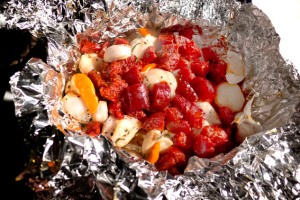 were scallops with chorizo and

Clonakilty black pudding. The scallops, chorizo and black pudding were the sensation of the party and a fitting finale. 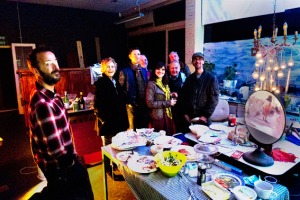 I can’t say that I had time for much socialising until the end, but it did seem like the guests were having a good time!