I know it’s been hotter than July, but the temperature has dropped again (just in time for the Jubilee) and I noticed beef osso buco in the butchers for £5.50. This is cheaper than my usual veal osso buco and I thought, “It’s beef so must have more flavour!” It was obviously irresistible. Initially I thought that the price was good, but when I went to buy it, I realised it was £5.50 per kilo – I’d been thinking per pound! These pieces are considerably larger than the veal equivalent because the animal is older. I was going to buy two pieces, but it was so cheap I bought three. For anyone wondering what osso buco is, it’s Italian for bone with a hole and generally that’s sliced shin of veal or beef.

3 pieces of beef osso buco
4 slices of chopped, smoked streaky bacon
2 heaped tablespoons plain flour
1 large onion (chopped)
2 medium carrots (chopped)
2 sticks of celery (chopped)
6 pieces of garlic (finely chopped)
4 or 5 fresh plum tomatoes, blanched, peeled and chopped (or a tin of the same)
1 tablespoon of tomato puree
1 teaspoon of anchovy paste
1 glass of red wine for the osso buco (and 1 for the chef)
1 tablespoon of red wine vinegar
a splash of Balsamic vinegar
half a pint of home made chicken or beef stock
2 tablespoons of olive oil
3 teaspoons of ground herbs (rosemary, sage and thyme – ground up in a mortar and pestle with coarse sea salt and black peppercorns)
2 bay leaves
a pinch of crushed chilli
2 heaped tablespoons plain flour
1 teaspoon of mustard powder 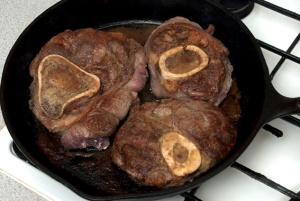 I cooked beef osso buco very much in the same way I would the veal, but this is beef and an older animal, so it needs a longer cooking time. I also discovered that while these three pieces would fit in my usual cast iron casserole full of sauce, they wouldn’t all brown in the bottom of the pan, so I used a very large cast iron frying pan instead.

Mix the flour and mustard powder on a plate and coat the osso buco. Heat some oil in a cast iron pan until it just starts to smoke and brown the meat on both sides. 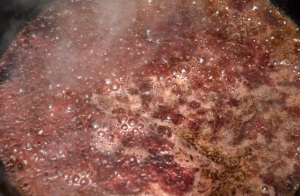 When browned, remove the meat from the pan and deglaze it with a litle red wine and red wine vinegar – reserve and keep this for later.

Heat some olive oil in a large cast iron casserole and start by frying the the onion, chilli and bacon. When it takes a little colour, stir in the carrots, celery and garlic. 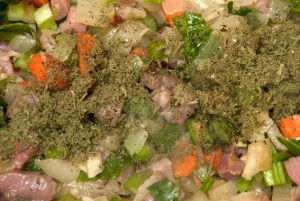 Sprinkle on the ground herbs

stir in the flour

before stirring in the remaining flour and and mustard (from coating the meat). This will help to thicken the sauce as it cooks.

Add the tomatoes, wine, red wine vinegar, purée, anchovy paste, bay leaves, stock and the deglazing liquid. Stir this all together and let it bubble for a few minutes before tasting. It’s obviously not going to taste the same as it will in four hours time, but you should be able to get an idea of the flavours and at this point a little extra can be added if needed.

meat added to the sauce

Push the meat down into the sauce, make sure it’s simmering and put the lid on. Place the casserole into a preheated oven at 120º C.

Cook for about 3 hours or until the meat becomes tender – it should be just falling off the bone. I usually have a look and taste every hour, but you could probably leave it  without checking for a couple of hours. If it gets too thick, add some more stock, wine or water. Do check the flavour and seasoning before serving. I like to add a splash of Balsamic vinegar right before the end.

Osso buco is very good with mashed potato (or celeriac when in season). The marrow in the bone is my favourite part. Beef osso buco definitely does have more flavour than veal and it also has more marrow.

In Britain, veal is quite expensive, but I did notice, recently, that it’s the reverse in Barcelona. Veal osso buco is very cheap in the Boqueria, while the beef osso buco is expensive!