I thought about cooking the first happy chicken as coq au vin, but I had 2 pints of chicken and smoked turkey stock in the freezer, which got the better of me.

I browned the chicken all over in a large cast iron frying pan with some olive oil. When it had taken a suitable colour I poured a glass of Spanish sherry brandy over the top and set light to it. There were some great flames, but, my large flash head, bounced off the ceiling, has cancelled them out in the picture. If I was doing this in a studio, I’d have the camera on a tripod and take multiple controlled exposures to get it right, perhaps even using several chickens. Most food from photographic shoots isn’t eaten, since it sits around in a warm studio all day and gets considerable manhandling.  As I was intending to eat this and there’s not much room in the kitchen, I put up with the picures I got. The brandy flavours the chicken and the flame burns off the alcohol. 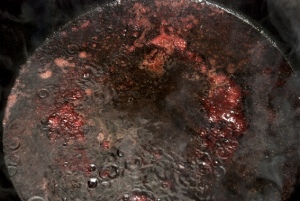 Once the flames had gone out, I removed the chicken and deglazed the pan with a glass of red wine and some red wine vinegar.

In the meantime I heated up the chicken and smoked turkey stock in a cast iron casserole.  The stock was made as per my recipe here – I added the cooked carcasses of two chickens and the leftover bone from a smoked turkey leg.

The offal from all three happy chicken was added to the stock for extra flavour, along with the deglazing liquid.

I cooked the cockerel (lid on) for two hours in the oven at 100ºC. It tasted delicious with seasonal vegetables – broad beans, carrots, new potatoes and peas.

It went down well with a couple of glasses of Carta Roja Monastrell.