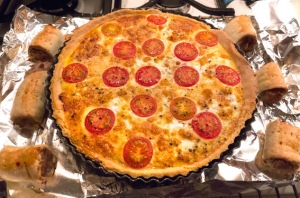 I went to Fiona’s birthday on Friday, a little early, with the intention of knocking up a quiche and some sausage rolls before the other guests arrived. Things didn’t go quite to schedule, but there’s no harm in the guests smelling the food cooking and there were lots of other nibbles to prevent the wine getting too wet! 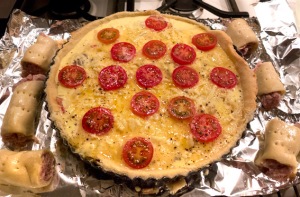 ready for the oven

I made the pastry beforehand and it rolled out perfectly – my biggest worry had been that it might split slightly and then leak while cooking. Fiona bought a very nice new quiche dish for the occasion – I was impressed by the weight (other cooks will appreciate that detail). The quiche contained bacon, onions, tomatoes and cheese, as per my recipe here, plus an additional 3 eggs – I think the dish is deeper than my one. I was very happy to see that the quiche didn’t last long – I think that’s a good sign. 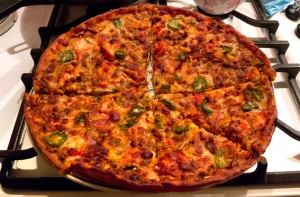 Susy arrived with three Bombay Pizzas, which she’d bought in Kingsbury. I’ve no idea what was in them, but they were pungent and spicy with jalapeños on top. I was suitably impressed and ate at least two slices.

I modified last year’s sausage rolls – this year I used soft chorizo, the type one would normally cook in a stew. The spicy pimentón gave them a welcome kick – definitely something to make again!

Susy bought a beautiful glass tiered cake stand and filled it full of cakes from Lisboa, the famous Portuguese bakery on Goldborne Road – I really wanted to photograph it, but it was quite big and I couldn’t put it anywhere where there was enough light.

About 2 hours in to the party, Fiona’s friend Hilary made a spectacular entrance, playing happy birthday on the bagpipes, as she climbed several flight of stairs to the flat. I stayed until about 2.30, but there was no sign of the party ending when I left…