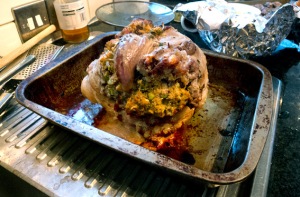 On Sunday I cooked Sunday lunch for 9 people with Oli, chez Rick and Su in Golders Green. We went to Borough Market to plan the meal, but I bought a leg of lamb from Theobalds on the way (Grahame the butcher boned the lamb so that it could be stuffed). 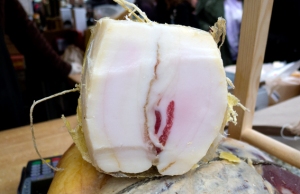 We were talking about Lardo as we walked around the market and literally, right in front of us, was an Italian stall selling it – it’s quite an unusual product to find in Britain. For the uninitiated, Lardo is pig fat cured with rosemary and other herbs and spices. It’s a bit like a cross between Lard and Proscuitto ham. I didn’t know how we’d use it but I knew we had to buy some. 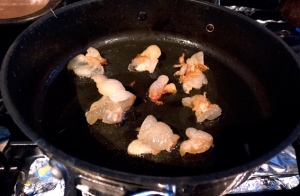 I sliced the Lardo as thinly as possible and fried it to make it crispy (this could be quite unorthodox – I believe it’s normally sliced and served on warm toast). 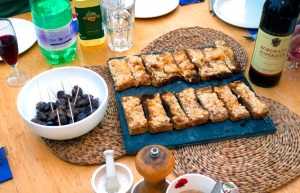 Meanwhile, Oli toasted some bread and made soldiers. The soldiers were spread with soft cod roe and half of them were served with Lardo. The taste of cod roe and crispy Lardo combined was amazing. 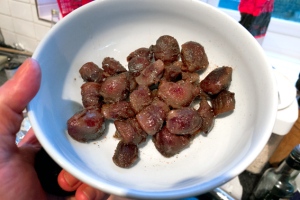 As an additional amuse-bouche we heated Confit de Gésiers in the oven and served them in a bowl with a sprinkling of Umami Dust (more on that later). Confit de Gésiers are duck gizzards, cooked and preserved in duck fat. 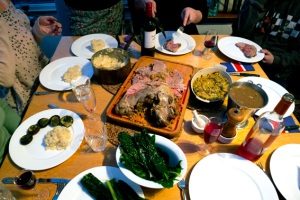 The stuffing for the lamb was made with 1lb of light and dark crab meat (from the fishmonger in borough Market), spring onions, garlic, 4 anchovies, juniper berries, ginger, curry powder, fresh mint, a shallot, tomato purée and 2 egg whites. The lamb was tied with butchers string to keep the stuffing in. The anchovies came in olive oil, so I rubbed the oil into the outside of the lamb and sprinkled it with a little Umami Dust. The lamb cooked in a fan assisted oven at 175º C for 90 minutes. There was a dish full of stuffing leftover, so that went into the oven later, 30 minutes before dishing up and was served on the side.

Umami is the Japanese name for the fifth basic taste – savoury. The others being bitter, salty, sour and sweet. The kind of foods that produce a savoury flavour when combined are: tomato, garlic, lemon, anchovy, vinegar, salt and mushroom. These ingredients have been combined to make a commercial product – Taste 5 Umami Dust. The dust was sitting on the counter while we were cooking, so it seemed like something to try. IMHO all the food tasted great, but you’ll notice that we used lots of the combined Umami creating ingredients anyway, in fact I use those ingredients in almost all meals… 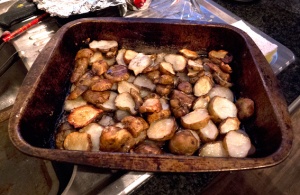 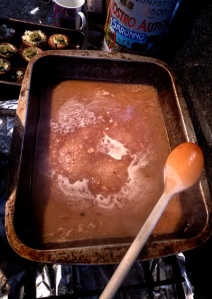 home made gravy. The stock was made by boiling up the lamb bone with herbs (rosemary, sage and thyme), carrots, carrot tops, celery, garlic, leek tops and spring onion tops – by tops I mean the leftover bits of vegetables that didn’t go into something else. The stock was stirred into the gravy, made from duck fat, the lamb juices, plain flour, red wine and Balsamic Vinegar. The lamb rested in foil for 30 minutes while the gravy was cooking. 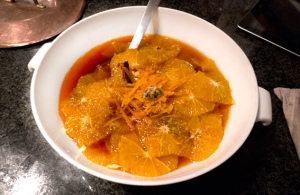 While we made a mess in the kitchen, Su prepared some beautiful caramelised oranges with cinnamon. 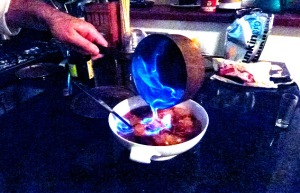 At the appropriate moment, Oli flamed the oranges with Cardenal Mendoza – an outstanding Brandy de Jerez with a shocking price tag. 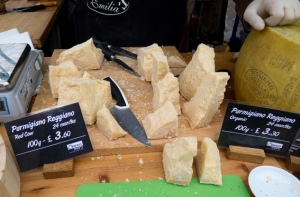 While buying the Lardo in Borough market, we also came across some fantastic Parmesan cheese, which was far too good for pasta, so we had it as the cheese course instead!

Throughout the afternoon, Sam produced some amazing cocktails and delighted us with magic tricks. Examples of Sam’s genius can be seen here and there.