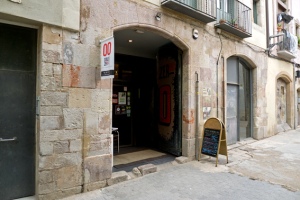 I have to admit that I was a bit sceptical about going for a Sushi lunch menu in what looks like a bodega (old fashioned Spanish wine bar selling wine from the barrel, glasses of wine and sometimes groceries). However, Debbie had been before and was full of praise, so five of us went to Doble Zeroo for lunch.

The lunch menu had four options between 10.50 – 14.50€ – the cheaper ones contained lots of rice and the expensive ones had more fish. Surtido de Nigrini y Sashimi was the most expensive, but it’s a reasonable price for Sashimi so most of us ordered that.

The menu included an aperitivo del dia (aperitif), which I believe was a Gunkan Maguro Tartare – a little ball of tuna tartare. It was quite delicious.

Debbie raved about the Gyosas (Gyoza), which they readily swapped for the set Miso Soup. These are a steamed, fried dumplings, (appropriated from Chinese Jiaozi) commonly containing pork, cabbage, garlic and ginger. They were very good and reminded me of Polish Pierogi.

Nokie ordered some Edamame Beans, which we all shared.

The Nigiri and Sashimi looked and tasted amazing. Firstly there was a lot of it and secondly the fish was of excellent quality, very soft and succulent – far superior to anything I’ve had in Britain. It literally melted in the mouth. Debbie was very enthusiastic about the Butter Fish, bottom left, white Sashimi – it was all quite fantastic! 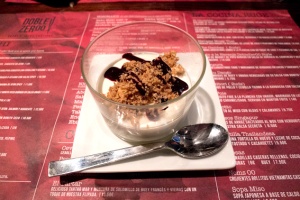 I think we all had Tarta de Queso for dessert – my brain gets fooled every time into thinking it’s cheese tart when of course it’s cheese cake! Needless to say, it was light and fluffy with a nice twist – the biscuit on top.

The service was good, and the restaurant was full, though it didn’t seem to have any Japanese staff – I do hope they were not locked in the kitchen.