The Soho Food Feast has become an annual charity event in aid of Soho Parish Primary School. It’s organised by Margot Henderson and held in St. Anne’s Church yard – local chefs, restaurants and bars are invited to show their support. The event costs £15 to attend and £2 tickets are on sale for sample/tapa food dishes. Due to the success of recent years, this years festival was held on the 8th and 9th June. Last year the event raised £35,000 for the school. All the tickets this year had sold out in advance.

We got lucky with the weather, it was sunny and not so hot you’d get sunstroke. The majority of the food was under a marquee and therefore safe from the elements regardless.

My first stop was at the St. John stall, where Margot Henderson was preparing ox heart

to go into ox heart buns,

with their special pickled walnut relish and horseradish cream. Fergus Henderson was in a grand  mood, drink in hand – I teased him about getting his wife to do all the work! As usual the ox heart was excellent and very tender – it needs to sliced thinly and cooked fast or it gets tough.

I was given a sample of delicious empedrat, at the Brindisa stall,

a delicious Catalan, white bean and bacalao salad. They kindly gave it to me, no ticket required, 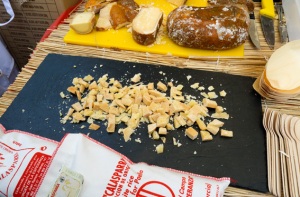 along with a sample of Mahón cheese from Menorca –

so I had to go back for a paid tapa later on. The cheese itself is aged, which gives it a nutty, sharp, salty taste and a hard texture. As seen above, it was served with little crackers and a tomato jam (a bit like a marmalade). I was given a sample of red Portuguese Douro wine (from Trevor doing the St. John wine tastings) to wash the cheese down.

Kopapa (a New Zealand restaurant in Covent Garden) had a real flavour and texture sensation in their spicy pork, coconut, tamarind and gapi ball, coriander, mint and crispy shallots on endive. The ball was soft and porky, with a savoury hint of fish, which went perfectly alongside the crunchy shallots.

I had a fantastic lamb kofte from Belazu.

It came on top of barley couscous and rose harissa yoghurt – it was pungent and fiery, which made my mouth tingle in a very good way. 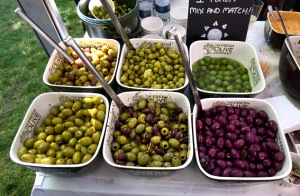 I was given some olives from The Fresh Olive Company, while I waited for the kofte. Those dark green ones, top right are a bit special.

The Wright Brothers had beautiful displays of Jersey Oysters, which Camilla told me were excellent.

Cinnamon cooked one of my favourites today, a chilli chicken

This unusual fusion of Chinese and Indian was hot, savoury and creamy all at the same time. 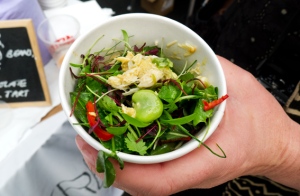 Fiona let me taste her excellent Dorset crab, asparagus, broad beans, chilli and mint from 10 Greek Street. They also had some salted chocolate and caramel tart, which had all gone before I got round to a second lap. 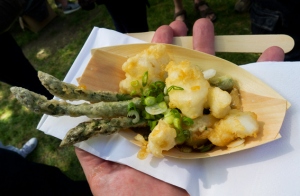 My favourite of the day, was probably the cod and asparagus tempura with udon chips, curry sauce and a splash of citrus soy sauce from Koya. 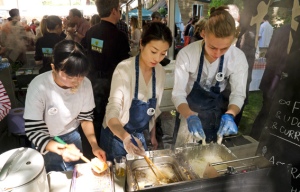 This surprising food combination was all freshly cooked, on demand and looking back on a previous year, I’ve noticed that their creative cooking and hard work impressed me before – I’ll need to visit the restaurant soon! 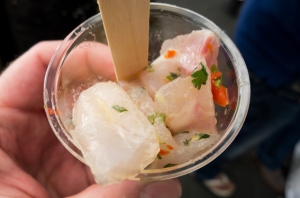 Ceviche were wonderfully kind to me – I’m not crazy about sweet potato (or many other sweet things), but really wanted to try their Don Ceviche of seabass ceviche in amarillo chilli tiger’s milk, limo chilli, sweet potato and red onions – minus the sweet potato. They were brilliant and gave me a a cup of what I wanted. The fish tasted fantastic and the amarillo chilli tiger’s milk had a kick like a mule – just the way I like it!

…later on, they’d run out of the small rolls, but not the ingredients. Keen to promote their terrific bread (available to buy from the restaurant) further, they sliced up some rather unusual large sandwiches. 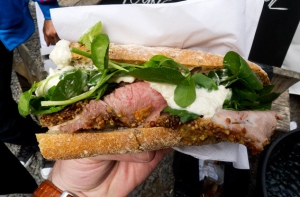 They got no hesitation from me, I nabbed a monster sandwich, three times larger than the buns!

Things in the food tent started to quieten down as the comestibles ran out, from about 4pm.

Unlike most of my friends, I concentrated on the amazing food for several hours before having a few drinks. We had some great Margaritas at the Chipotle cocktail stand and they gave us a free canvas bag each! The best cocktail however, was the Pisco Sour from Ceviche, who were quite keen to show us their new book, which will definitely be on my Christmas wish list.

All that eating and drinking had to be paid for with a dance – you might just be able to see Margot Henderson at the back left, who out danced everyone to 80’s disco classics for an hour!

We retreated to the French House later, but as the hoard got more drunken and my legs ached, a few of us sneaked off to Blacks for a long sit down with more cheese and olives…