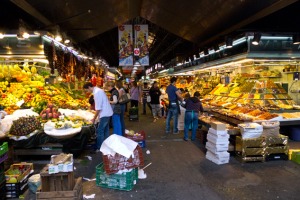 Having been suitably restored at La Palmera, Matthew and I met Oli and Salva in the Boqueria to shop for this evening’s supper on the roof terrace. After walking round and round the circular fish section, quite a few times, we settled on lots of fish and some galtas.

Oli was cooking galtas (veal cheeks) in a curry sauce with a mint and pea mousse and Salva was making a tortilla de bacalao. Matthew was in charge of salad. I left the other chefs downstairs and went to prepare the fish on the roof, which has a large sink. The sun was going down and there was a light breeze – I was delighted to have escaped the hot kitchen.

I cleaned and salted a mountain of rapé (monkfish) tails, which we’d found very cheap. Salting white fish for about 10 minutes or so removes some of the water content and firms up the flesh. Rinse the salt off or the fish will taste too salty. Above, the fish have been rinsed, sprinkled with chopped garlic and parsley and are marinating in lemon juice and olive oil. 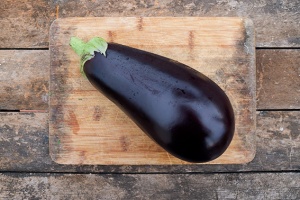 While the monkfish was salting, I sliced three aubergines.

These were salted and layered in a colander – the salting is probably unnecessary with modern aubergine varieties. It used to be necessary to remove bitterness, but it does help to remove a bit of water from the flesh. I rinsed them in water after 15 minutes and sprinkled them with lemon juice to stop them going brown before cooking.

Downstairs in the kitchen, Oli was preparing the cheeks with bay leaves, cardamon pods, coriander, cumin and star anise. 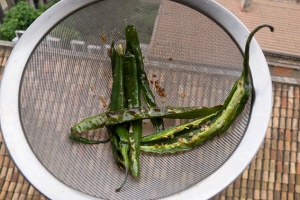 Salva had infused some olive oil with chilli and was gently caramelising onions for the tortilla. 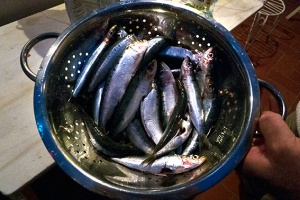 Back upstairs, I cleaned over a kilo of sardines and was reminded of my first week living in Barcelona, back in 1991.

I still have the Polaroid (above) of Jorge cleaning a big pile of sardines on Susan Ferguson’s roof, just two streets away, on a dull day in June, 22 years ago.

It seemed to get dark quickly and suddenly the were 14 of us for dinner. I tried barbecuing monkfish on terracotta roof tiles, which were conveniently left from recent roof repairs, but they proved a bit slow, so they were abandoned in favour of the regular rooftop DIY barbecue wheelbarrow. 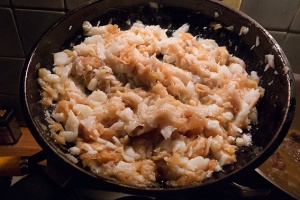 In the meantime, Salva had caramelised his onions for 2 hours before briefly cooking them with the bacalao. The bacalao and onions went into a dozen beaten eggs, cooked and flipped in very hot olive oil to produce a tortilla de bacalao. 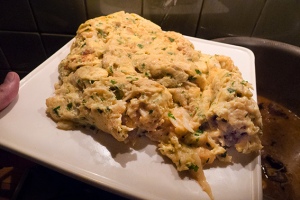 This tortilla is quite loose, it doesn’t stick firmly together like a tortilla de patatas, but the above picture was just after flipping and it was reformed into a nice square before serving. The size above is deceptive – there are two large onions, 12 eggs and a quarter of a kilo of bacalao in the tortilla. If attempting this at home, don’t add salt, there’s more than enough in the bacalao.

sardinas on the griddle

Meanwhile, back on the roof, the monkfish was cooking nicely on the barbecue, albeit a bit slowly. Fortunately, in the cupboard on the roof, next to the bar fridge, I found a hot plate, so the sardinas were cooked on a griddle pan, with a liberal helping of olive oil, lemon juice, garlic and parsley.

Hot on the tail of the sardines, were about 30 razor clams. I cooked these in the same pan as the sardines and they benefitted from the juices left behind. Cook razor clams very hot and very quickly – 3 or 4 minutes should suffice or they will become quite rubbery.

Evidently we’d gotten ahead of ourselves in the Boqueria – even with 14 hungry mouths to feed, the scallops, above, got away and had to go back into the fridge.