This week Marek the Butcher created some Mexican style sausages.

These are made of course ground pork, cayenne pepper, cinnamon, cloves, cumin, mild paprika and vinegar. I wouldn’t call these a chorizo personally but I did find an online  Mexican chorizo recipe which does contain very similar ingredients and I haven’t been to Mexico yet… 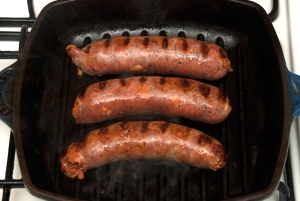 There were some comments from the other butchers in Theobalds, with regard to the spiciness of the sausages, so I was expecting a bit of heat. You can see the redness of the cayenne pepper in the sausage colour. 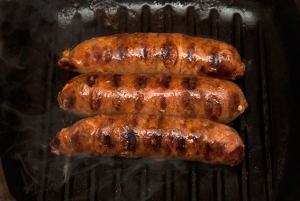 I like spicy food, but having been forewarned, I made a fairly neutral gravy accompaniment with flour, butter and fresh duck stock (that just happened to be in the fridge). Of course I also deglazed the pan with a little red wine and balsamic vinegar which went into the gravy. As it turned out, the sausages were delicious and well below my heat tolerance level, though that’s not to say they didn’t have a bit of a kick!

I consumed the sausages with seasonal vegetables and put the flames out with a glass of Domaine du Cros, vin rouge de Marcillac.