You may remember that I visited Xiringuito Aigua in August, but that it got dark before the food arrived and I didn’t have any pictures to show for it. This visit I thought I should return to Xiringuito Aigua at lunchtime to get some good pictures of the outstanding food.

However, last Saturday Jordi Marimon (the proprietor) opened a second cabin/tapas bar in the newly refurbished and reopened Los Encantes flea market to great fanfare. Since the food is quite similar at Fogó (burner on a stove), we thought we’d better go and check it out instead.

Oli is a good friend of Jordi and his brother Albert (voted the No 1 chef in Cataluña this year) and we got red carpet treatment. Albert said he’d order for us – you can’t get better than that!

First out of the kitchen was Cap I Pota – calf’s head and foot in an unctuous sauce. This is a very traditional Catalan dish and Albert really excelled himself. The meat was beautifully tender and the sauce was thick and sticky. 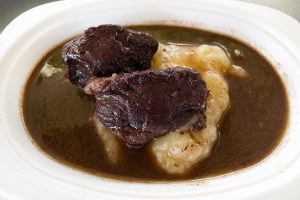 Galtes de Porc Negre – black pig cheeks, slowly braised in a sauce and served on top of mashed potato. We were both of the opinion that the mash contained some celeriac.

Brava Fogó – Albert’s take on patatas bravas – here we have a single fluffy potato with a spicy hot tomato sauce and home made allioli. I love the regular patatas bravas, but this was so much better! 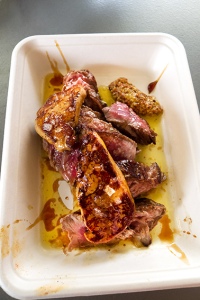 Just as we finished our lunch, our friend Lucy arrived with her boss and we got to try more of Albert’s cuisine!

Bou I Foie – medallions of rare beef with slices of foie gras and grain mustard on the side. 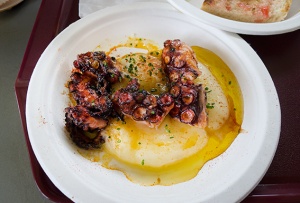 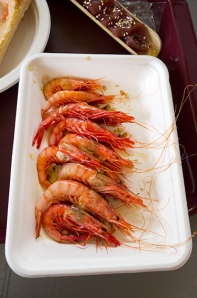 Gambas De Palamós – beautifully sweet prawns from Palamós, which come out of the sea bright red. 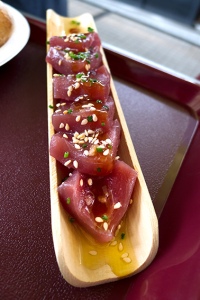 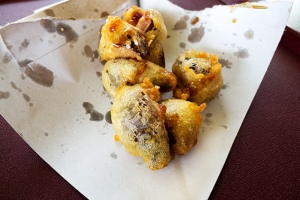 I felt like I’d died and gone to heaven – twice in one lunchtime!

We noticed that Fogó sells a rather unusual drink – Suau Quim. This is a traditional Catalan cola drink, but the real difference in flavour to other colas is the addition of coffee. The taste is quite unusual, it’s distinctly cola and coffee.

marcy and the nomad chef

Marcy and the Nomad Chef worked incredibly hard cooking and serving the food. Fogó is part of a row of food bars at Los Encantes and is by far the most busy. I’m sure if it was a sit down restaurant they would have done at least 200 covers this lunchtime!

I drank red wine with lunch, since Fogó sells red or white wine and beer, there’s no rosado. Lunch costs about 25€ for 2 people. The average price of each dish is about 4€. Food service finishes at 8pm.