One would think that after our blow out feast at Fogó we would have had enough food for one day! Me too, but today happened to be the launch of De Tapes Per Barcelona and by 9 pm we were getting peckish… 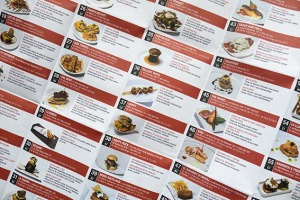 De Tapes Per Barcelona is the 7th incarnation of this biannual city wide tapas festival sponsored by the Estrella Damm brewery. 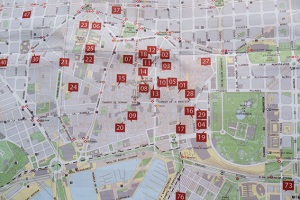 76 bars and restaurants are taking part this time – each provides a tapa and a small Estrella beer for 2.40€. All participating bars have a big poster outside and leaflets containing details/pictures of the tapas each bar does. There’s a map of Barcelona on the back pinpointing where all the establishments are. Someone had even produced a mobile phone app too!

We thought we’d start in the middle, by the cathedral, as there were a quite a few participants in a small space and it would be easy to go from bar to bar (as per the map above).

We started at Set de Gòtic, just off Portal de l’Àngel. It’s a traditional looking restaurant selling a lot of charcuterie. I hadn’t been there before but it is the kind of place I would visit. 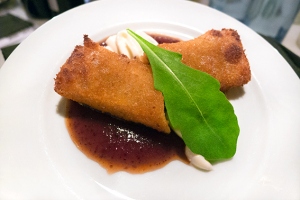 The tapa here was El Boletaire – a crusty cannelloni containing seasonal mushrooms and nuts with a gorgonzola and roquefort foam and a port and fig sauce. I really enjoyed the cannelloni and cheese foam, but the sauce was a bit sweet for my savoury taste buds. Regardless, it’s an elaborate tapa which I’m sure is quite poplar with most people.

La Taverna del Bisbe looks like an old school establishment with doormen and dark wooden bar and tables. With the staff in smart uniforms it reminds me of the Lions Tea Houses I used to visit with my grandmother back in the 1960s.

We sat at the bar, with a table top fridge containing all sorts of exciting tapas. The offering here was Tataki de Tonyina Vermella – blue fin tuna served tataki style. Tataki is a Japanese method of briefly searing fish or meat in a hot pan. The tuna was served with citrus and tomato marmalade – it was absolutely delicious.

El Cafè D’en Víctor is literally joined to La Taverna del Bisbe, but in stark contrast is all chrome and plastic. The outside terrace is very nice, but the interior doesn’t suit me at all. When we ordered our beer and tapas, the waiter asked the barman for draft beers and the poor guy thought he meant large ones. This caused a big argument between them, which amused me since I understood the names they were calling each other!

Here we had Tast Basc – which I believe means Basque taste or taste of the Basque, so the influence here is Basque cuisine. The Tast Basc was a choux pastry filled with bacalao (salt cod) and a tuna truffle taco with ginger jam. I really enjoyed this.

We walked around the corner and were at La Gloria. We were both feeling a bit bloated by the beer (I prefer wine normally) so we sat outside and drank a rosado. Unfortunately the tapas and beer have to be consumed inside, so we had to pay for the wine before going in to try the tapa.

Like La Taverna del Bisbe (above) La Gloria is quite a traditional bar selling racións (small portions) of food which you choose from a fridge running along the back of the counter. All the food here looks very good.

The tapa in La Gloria was Gratacels (skyscrapers) – boneless pig trotters reformed into a little tower, served with a samfaina (ratatouille). this was without a doubt my favourite. The rich and sticky trotters were marvellous!

It was getting a bit late after La Gloria – we did try to get a tapa at H3, just up the road, but they’d stopped serving, so we retired to Iposa for a glass of wine. I’d really enjoyed the food, but the beer had made me feel quite stuffed…

16 Responses to De Tapes Per Barcelona