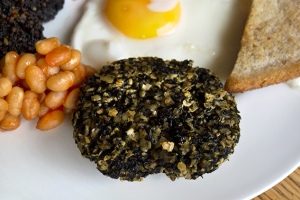 A couple of months ago my friend Tim invited me to Wales for the Abergavenny Food Festival. He said he’d sort out the tickets and accommodation, so frankly it was an offer I couldn’t refuse. 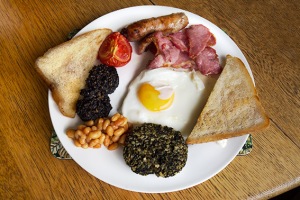 I arrived on Friday and was promised a full Welsh breakfast and mountain climb, the following morning, before proceeding to the first day of the festival in the afternoon. I did think the mountain might finish me off, but the breakfast and perhaps more precisely, the laverbread (bara lawr) carried me through the day and late on into the night…

Incidentally, we listened to the live Radio 4 broadcast from the Abergavenny Food Festival while we ate. 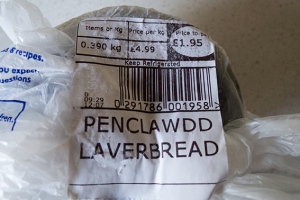 Laverbread is an ancient Welsh delicacy made from seaweed (laver). The main type of seaweed used is purple laver (Porphyra umbilicalis), actually a brownish colour, which becomes a dark green paste after washing (to remove sand) and boiling for several hours. A common method of serving laverbread is to mix it with oatmeal before frying it in cakes (see top photo). The above laver came from Penclawdd in Swansea, famous for its cockles since Roman times.

Laverbread is full of iron, iodine and vitamin B12. Supposedly it helps to lower blood pressure and cholesterol, while removing free radicals and aiding digestion. I really enjoyed the flavour, salty and savoury, reminding me of the Japanese nori seaweed used for making sushi (it is the same variety of seaweed, but prepared differently). The oats taste fairly neutral, but give the laverbread a good crunchy texture when fried (ideally with bacon or in bacon fat). It goes down very well with Welsh bacon, fried egg and Irish Clonakilty black pudding (how did that get in there?). No doubt laverbread is also good with fish. Richard Burton once described it as, “Welshman’s caviar.” 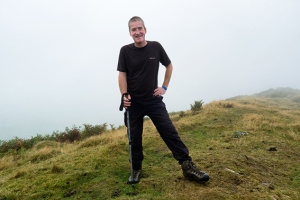 tim on the summit

By 11 O’Clock we’d circumnavigated and climbed the Skirrid (Ysgyryd Fawr) on the eastern edge of the Black Mountains. I was hoping for a good shot of Abergavenny from the mountain, but everything was shrouded in mist and I couldn’t even get a decent shot of the Skirrid itself. 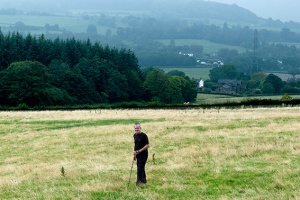 Things were brightening up as we descended and walked back to Tim’s house through fields of grass, corn and sheep. I did think several times about Cecilia’s farm in America  (thekitchensgarden), as the lambs bleated and ran away from us.

By 12.30, when we got back to the house, the mist had lifted, just in time to visit the food festival…