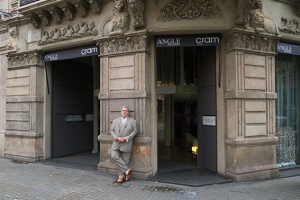 A couple of weeks before I arrived in Barcelona, Oli sent me an email saying that he was owed £70 by Google Ads, but the money had to be payed into a UK bank account, which he no longer had after living in Cataluña for 10 years. He suggested that he get the money transferred to my bank account and that I exchange it for Euros in order to go out and have a slap up lunch. How could I refuse – the exchange rate was good and the £70 became a €100 lunch kitty.

After hours of deliberation, Oli came across a great looking lunch menu at Angle, for €45. Angle is Jordi Cruz’s Michelin starred restaurant in Hotel Cram, just above Universitat in Eixample.

The first three menu items (click the picture above to enlarge) were inclusive and then the fish, meat and pudding courses were either or choices. We realised that we could eat the entire menu by making opposite choices and sharing. At the time, there was a more expensive lunch menu for €80, which included all the items above, so in a way, we’d each get the better menu!

Lunch began with a classic Spanish starter transformed – a shot glass of melon juice with an almost invisible, translucent focaccia wafer on top, covered in petal like slivers of jamón ibérico. We were off to an excellent start.

The next starter was a crispy corn taco containing foie gras, served on a rock. The rock was somewhat eccentric and like all tacos it was slightly messy, but delicious none the less.

The final starter and perhaps the best one, was a cured egg yolk with a selection of Iberian meats.

The yolk had been prepared sous vide and came housed in the cured meat and a thin slice of crispy bread. This was deliciously creamy and what made the dish (oddly) was the savoury mashed potato under the egg, containing, perhaps,  a hint of truffle. 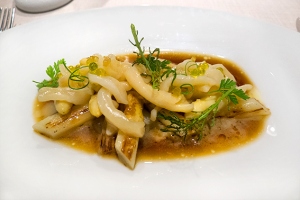 white asparagus and cod in papillote

The fish courses were: cod with white asparagus in papillote (steamed in parchment) – this was beautifully tender – note the little green and yellow pearls, which look like fish roe, but were in fact fruity

sole with artichokes and black olives

…and megrim sole with artichokes and black olives. This type of sole is plentiful around Cornwall, but like hake, is fairly unloved in the UK and most is exported to Spain. IMHO the Spanish have the right idea, megrim has a firm texture and works really well with the distinct flavours of artichokes and olives. The crispy skin was fantastic!

…and roast guinea fowl with aubergine textures – foie gras stuffed guinea fowl and smokey aubergine – it was quite astonishingly good.

The puddings were: a little house, made of Belgian Ale, chocolate banana and black olive – the chocoholics out there would die for this

…and an astonishing winter scene of coconut, yogurt, green apple and yuzu!

We drank a bottle of wine each – I was mainly on a Muga rosado, while Oli had a white. In a London restaurant of this caliber, one would expect to pay about £50 for a bottle of wine – well not here, both wines were around €20 each – the Muga costs at least £10 in UK shops, let alone restaurants where there’s normally a considerable markup. 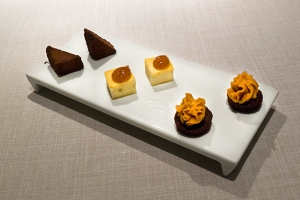 Just as we though it was all over, they brought us a tray of petit fours! Obviously this wasn’t a cheap menú del dia but the bill for all that food and two bottles of wine was €150 – a complete bargain (this included the impeccable service). We had the most attentive and discreet service – our main waiter was actually Irish, though he’s lived in Barcelona for so long that I didn’t detect his nationality until about three quarters of the way though our meal.

We made an excellent choice for a special lunch – thank you Mr. Google!