I went to the butchers to buy a cornfed chicken and immediately noticed a pile of lamb shanks in the window, priced £1.50 each. Steve the butcher said, “At thirty bob – we’re going pre-decimal this week.” I laughed and bought four. Lamb shanks used to be a cheap cut before the TV chefs started banging on about them – now they can cost about £4.50 each, so these were a complete bargain.

For anyone unsure about what a lamb shank is, it’s the joint below the knee – underneath the leg or shoulder. The shoulder is at the front and leg is at the back. Out of interest I weighed these shanks when I got home and they were roughly 1 lb in weight each. If only I’d had room in the freezer for a dozen!

Start by browning the lamb shanks in a mixture of very hot olive oil and goose fat. This caramelises sugars on the surface of the meat and adds to the flavour. It shouldn’t take more than a few minutes. Once browned the shanks can be removed and set aside.

Using the same pan (ideally a cast iron casserole with lid), turn the heat down and fry the onion until it’s translucent, followed by the bacon, celery, carrots and garlic. When the vegetables have been cooked for a few minutes and are coated in oil, sprinkle on the ground herbs and a heaped dessertspoonful of plain flour. Give this a good stir – it will start to clump together and get messy – this is the base for your roux.

Slowly stir in half the stock to create a thick sauce. Squeeze in the tomato purée and anchovy paste and pour on the wine and red wine vinegar. Allow this to bubble for a few minutes, to burn off the alcohol in the wine before tasting. It will mellow considerably over time, but should have a nice savoury taste. If it tastes deficient in any way add a little more of the taste you think is missing. Don’t overdo it, you can always add more, but it’s hard to take taste away, particularly saltiness. 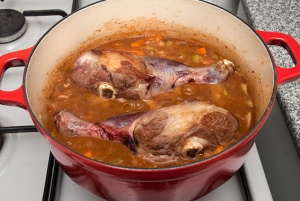 Put the lamb shanks back in the pot. At this stage you don’t want the sauce to be too thick, it will thicken over time. You can add more stock as required. Get the sauce to simmering and put the lid on. Remove the casserole from the hob to a preheated oven at about 150º C. This will need to cook slowly for about 3 hours to tenderise the meat. The shanks start off being a little tough, but slow cooking will make them melt in the mouth tender.

You can leave the casserole in the oven to bubble away for the duration, but I like to check it every 45 minutes or so, for flavour and consistency. I did add a little more red wine vinegar and anchovy paste. Towards the end I thought the sauce needed a little extra savoury and poured in a dessertspoonful of Geo Watkins Mushroom Ketchup. I always keep mushroom ketchup in the cupboard, it comes in handy on occasions, where you want a little extra savouriness – it’s somewhere in between soy sauce and Worcestershire Sauce. The ketchup is a black liquid and not at all like a thick red tomato ketchup.

The lamb shanks are done when the meat is falling off the bone and feels tender to the fork. Serve with mashed potato and a robust red wine.