Today we had lunch at Quinua with Adrian in Poblenou. Quinua is Spanish for Quinoa, the popular gluten free grain which is grown in the Andes. They describe their food as traditional and fusion. 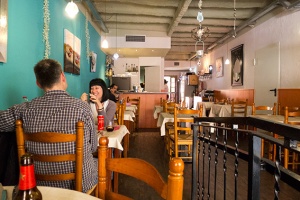 The restaurant is just off the Rambla de Poblenou and 5 minutes from the beach. It’s also just opposite Vell Poblenou, which similarly does a great menú del día. The layout is typical of a small Spanish restaurant – a window and door at the front with very little other daylight – this keeps the place cooler on a hot summer’s day. The kitchen and bar are at the back on the left. Quinua has about 11 tables inside and another 5 or 6 in the secluded courtyard at the rear.

As you can see above, the lunchtime menú is very good value and includes starter, main, pudding, bread and a drink for €11. I believe this establishment is run by a husband and wife team – he cooks and she serves the customers. I noticed a new family addition (to the side at the back), watching it’s mum and dad attending to the diners – I saw a couple of high chairs tucked away in a corner, so I believe it’s a family orientated locale (quite common in Spain).

We ordered the same starters and mains, commencing with a delicious arroz meloso con frutos del mar – a sticky rice (not unlike risotto) with fruits of the sea.

The main course was atún en lalaki con ensalada – a beautiful piece of seared tuna marinated in (I believe) fermented coconut sap (or sugar cane) with salad. I ordered mine pink in the middle. 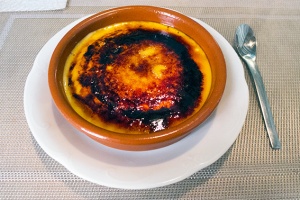 For pudding I had my favourite, crema catalana – the Catalan equivalent of crème brûlée, containing orange or lemon zest and cinnamon. Like Trinity burnt cream, crema catalana is traditionally branded to burn the sugar and not heated with a blow torch. 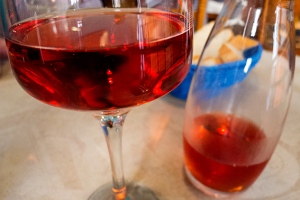 I drank vi rosat with my lunch, while the others had beer.

As usual, I finished my meal with a carajillo de cognac.