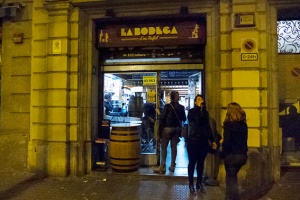 After lunch in Lascar 74, we had carajillos in a café on the Rambla de Raval and then went to meet Hilary (from The French House) at Walter’s Bar in Plaça de Vicenç Martorell. I’m sure I had another 3 rosados before heading up to Oli’s flat at about 7.30. I had time for  cup of tea and then it was off out for supper (just as well, since the ceviche didn’t keep me feeling full for long)!

I went out to meet Jonas and Silvia at La Bodega d’en Rafel – this was one of several meals on the evenings leading up to their wedding (where friends of theirs were arrived from afar). Tonight we dined with 3 chicas from Colombia and a chico from Paris. La Bodega d’en Rafel is yet another fabulous old school bar in Sant Antoni which has a local clientele and serves excellent, inexpensive, tapes. Sharing food makes for a such good way of getting to know new friends.

We were seated at a long table at the back, along with other customers. Jonas and Silvia are obviously regulars here – the owner and staff were very very friendly. We were given a single menu sheet (above – click to enlarge) in Catalan and what one does is highlight the required tapas with a marker pen. It’s worth noting that this is not a tourist bar and they are unlikely to speak English. However, they do have a menu in English for those that need it.

Silvia made short work of marking the llistat de tapes and plates of food soon started arriving on the table. The first being uncooked items, such as pa amb tomàquet (Catalan tomato bread), 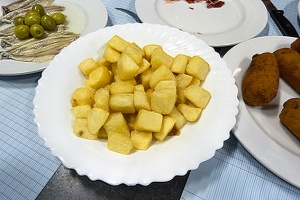 Somehow I managed to photograph the braves (patatas bravas) before the salsa brava (a hot chilli and tomato sauce, often mixed with mayonnaise these days) was poured on top – when everyone is sharing, one has to take the pictures quickly before the food is literally grabbed from the plate! 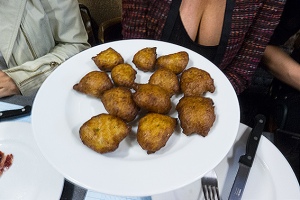 The above are large prawns, deep fried in breadcrumbs, not unlike something that one might have in a Chinese Dim Sum restaurant. I’m not entirely sure what they are called in Catalan, but the purple ink on the menu suggests that they are torpedos.

Aside from the pebrots (peppers) and pop (octopus) that failed to make it to the camera, the final two dishes were the above, amazingly delicate lacón (cured white pig shoulder) sprinkled with pimentón 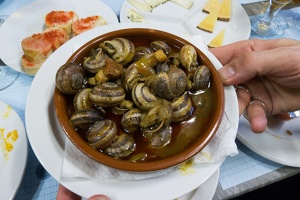 and the very best hot, spicy caragols (caracoles – snails) I have ever tasted.

I drank vino tinto (red) here – this is the type of old fashioned establishment that only believes there are two types of wine. Rosado is not considered to be correct.

While I was enjoying the last two dishes, Nookie and Lena Diaz (famous New York butcher) arrived. This was a complete coincidence – Lena had insisted on taking Nookie to La Bodega to try their tripe and other offal dishes. This meant that I got to taste the tripe and catch up with Lena, who was leaving tomorrow.

When we got the bill, the total came to €69.50 between 7 of us – the owner only charged us for food, providing all the alcohol (quite a few red wines, beers and cava from a porron) as a wedding present! As is traditional, we were treated to shots of heirbas (a strong liquor from the Balearic Islands), as a thank you for our custom. 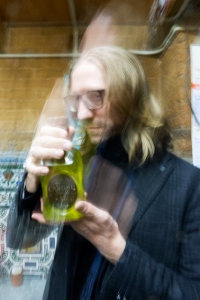 Jonas had just been telling me about someone who drank a whole bottle of heirbas here, thinking it was a non alcoholic drink – above, he lets the genie out of the bottle…

Afterwards, Silvia took the Colombian girls out dancing and apparently they didn’t come home until 9am! I went to Bar Babia for a drink and catch up with Lena and Nookie, somehow ending up with them in a bar on C/ Ample until the madrugada. The manager is a friend and she locked the doors, turned out the lights and we were drinking cava until 5am!