After lunch at Le Cinquante Huit, I did some work in Poblenou, before returning to Oli’s flat in the Raval. I barely had time for a cup of tea before it was time to go out again and meet the other guests who’d arrived for the wedding. Most of the new arrivals were from Sweden (Jonas‘ homeland). Tonight we ate in El Museu de l’Embotit (the museum of cured sausages). This is another traditional bar restaurant in Sant Antoni. 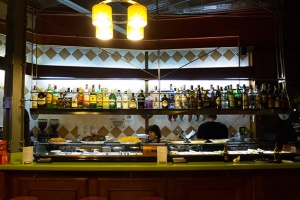 Like last night at La Bodega d’en Rafel, El Museu de l’Embotit does tapas, small portions of food that can be shared between friends. We practically took over the establishment and most of the tables had been pushed together in advance, in order to accommodate us. There were probably about 40 of us, a mixture mostly of Catalans, Colombians, English and Swedes. 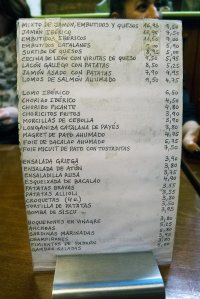 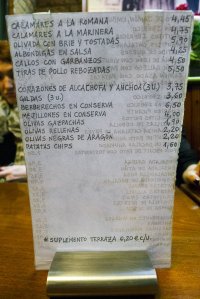 Click to read what was on offer. I grabbed a seat underneath a light, so as to get some reasonable shots of the food. As luck would have it, I was opposite my new Colombian friends from last night and next to some new Swedish acquaintances on either side.

The first dish to arrive at the table was boquerones en vinagre – fresh anchovies cured in wine vinegar, served in olive oil, with parsley and green olives. This was followed by: 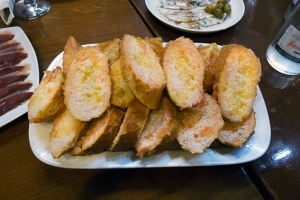 No meal in Cataluña is complete without pa amb tomàquet – bread rubbed with garlic and tomato, drizzled with olive oil and sprinkled with salt. We had many plates of this.

Magret de pato ahumado – thinly sliced, smoked magret de canard (the breast of a duck which has been reared for foie gras), drizzled with olive oil.

Tortilla de patatas – a classic Spanish omelette, made with potatoes.

Patatas bravas (tonight I managed to photograph them with the sauce) – chunks of fried potato drizzled with salsa brava, a hot chilli and tomato sauce (often mixed with mayonnaise these days).

Fantastic crispy croquetas – you can see from the irregular shapes that they are made en casa. 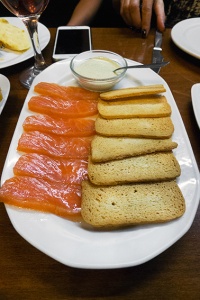 Lomos de salmón ahumado – thick cut loins of smoked salmon. I’ve had salmon cut like this from Hansen and Lydersen and definitely prefer it to the regular thin slices one generally gets in London.

Pimientos de padrón – little green peppers, originally brought to Spain from Mexico 200 years ago. They were adopted by the town of Padrón in Galicia, where they celebrate them with an annual festival in August. What makes these peppers special, is that most of them are sweet, but one in every five or so is hot. They are fried in olive oil and served salted. Eating them is like a culinary Russian roulette. 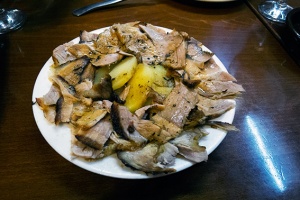 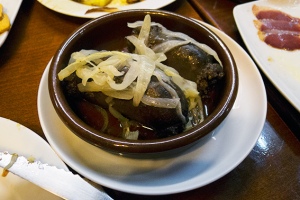 Morcillas de cebolla – black puddings containing onion and sometime pine nuts. These are very popular in Cataluña and quite delicious.

…and one of the final dishes that arrived, mixto de jamón, embutidos y quesos – cured ham, sausage and cheeses. You can see how I nearly missed this one, it didn’t last long!

I had some interesting conversations in a mixture of Spanish, Catalan and fortunately the Swedes speak fantastic English. I was telling Silvia’s Catalan friend opposite me that I’d lived in Barcelona through the Olympics and how I keep coming back. She immediately replied, “Tú bebiste de la fuente de Canaletes” – you drank from the Canaletes fountain. …and she was right, I did, in 1993. Legend has it that if you drink from the Canaletes fountain on the Ramblas, you will fall in love with Barcelona and always return.

You will be unsurprised to hear that I drank rosado – it was a good one that I’ve previously bought in local shops. I recognised the label, but can’t for the life of me remember the name! I didn’t see the bill, but I remember that we all ate and drink copious quantities. When it came to paying, I believe that everyone put in €22, which was extremely good value. The service here was cheerful and attentive. We probably would have stayed here all night if the owners hadn’t wanted to go home to bed at about midnight.

As you can imagine, with the arrival of new wedding guests, the night did not end here. We walked down to Absenta del Raval, where I had 3 more glasses of wine and Silvia poured a glass of beer on my leg (last time Jonas poured a glass of red wine on the other leg) – at least beer doesn’t stain! When the bar closed, we settled up …and then the staff offered to lock the doors so we could keep on drinking. I believe a few people had already gone back to Jonas and Silvia’s, so it was decided that Jonas would go and buy wine and beer and the party would continue at home. The poor Colombian girls, who’d been out dancing until 9am, had gone to bed, but had to put up with 20 of us partying until 5am!

No doubt I slept with the dead, but the next day I was awake before lunchtime and restored by an astonishing picante soup of bacalao, chickpeas and pimentón at the Victoria. In the evening I had supper with Dorian at Iposa – both of which are fantastic, but have been covered a few times before …so next stop, the wedding!