Empanadas are pies that come from Galicia in the North West of Spain. The name comes from the Spanish verb empanar, which means to wrap in bread. These pies come quite large, baked in a dish, or small and half moon shaped, sometimes baked and sometimes fried. Empanadas have become so popular that they can be found throughout the Spanish speaking world and Portugal, which is just below Galicia. Large baked tuna empanadas are very popular in Galicia, but there are many variations, such as; cheese, clams, spicy beef or chicken with chilli, chorizo, eel, ham, lamprey, sardines and many types of fruit or other sweet fillings for dessert.

I’ve tried a few different pastry recipes for empanadas, particularly for the small half moon shaped  ones above, filled with a beef chilli mixture. Lard mixed 50/50 with plain flour and cornmeal  (sometimes referred to as corn flour) is good for a flexible dough with an excellent crunch and the Mexican masa harina (not the same as regular cornmeal) produces a light, delicate pastry. For my tuna empanada I used Claudia Roden’s recipe which produces an elastic dough with a crispy biscuit like flavour.

In a large bowl, beat an egg and the baking powder with a fork. When this is mixed together add the olive oil, wine and salt, before slowly working in the flour to make a dough. Knead the dough with both hands in/over the bowl. Sprinkle on a little more flour if it is too wet (it should be slightly tacky from the olive oil). Let the dough rest at room temperature in the bowl (covered in cling film) for one hour. This pastry is easy to make and stays elastic – I’m certain it would work well with a food processor or mixer with dough hook. 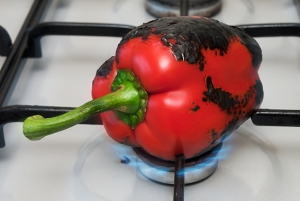 Since the tuna comes in olive oil, I recommend pouring it off and using it in the pastry or in cooking the empanada filling (I used a bit in both). In Spain, sweet red peppers (pimientos) are commonly charred siting on a gas ring, grilled (broiled) or barbecued to blacken them. When placed warm in a plastic or paper bag the blackened skin sticks to the bag and comes off easily. This gives them a lovely smokey flavour. These peeled and sliced red peppers can be bought in jars from shops and markets (for those who don’t want the hassle of charring and peeling). 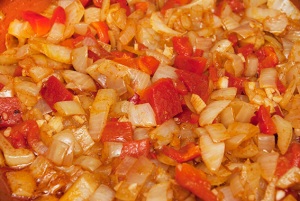 Fry the onion slowly in olive oil until it is soft. Sprinkle on the sweet pimentón de la vera before mixing in the garlic, pimiento and grated tomatoes. Allow the vegetables to cook in for 5 minutes before squirting in a little anchovy paste, a few turns of cracked black pepper and a splash of red wine vinegar. After another 5 minutes turn the heat off add the boiled eggs, olives and crumble in the tuna. Mix this all well and taste to see if it seems salty enough. Make sure that the saltiness of the olives is taken into account. When you are happy with the seasoning, leave the filling to cool for half an hour or so.

In the meantime, divide the pastry into two pieces, one a bit larger than the other. Both round and rectangular pie dishes are commonly used in Galicia – I used a rectangular enameled dish measuring 11 X 9 inches (28 X 23 cm) to its edges, which is perfect for the above recipe. Roll out the larger ball of dough, so that it’s slightly bigger than the pie dish. You don’t need extra flour for the rolling, as the pastry shouldn’t stick. Grease the dish with a little olive oil and gently fit the pastry inside, rolling it over with the rolling pin helps. Trim the edges and prick the base of the pastry a few times with a fork. Divide the leftover pastry egg into 2 dishes, yolk in one and white in the other. Beat the white and brush the dough base with it. Bake the base blind in the middle of a preheated oven at 200ºC for 10 minutes (no baking beans needed). When done remove from the oven and allow the pastry to cool.

When cold, fill the baked pastry base with the tuna mixture. Roll out the remaining dough to a shape slightly bigger than the top of the baking dish and again use the rolling pin to ease it onto the filling, then trim.

Go round the edges with a fork to crimp them down and poke a few fork holes into the top to allow hot air to escape. Beat the egg yolk with a teaspoon or two of cold water and brush over the top of the empanada. 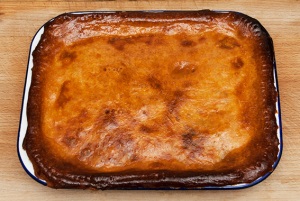 Bake the empanada in a preheated oven at 200ºC for about 45 minutes until golden brown. When cooked, allow to cool for 10 minutes before serving.

Cut the pie into 6 portions and serve with salad and a glass of dry white wine or cider. If you have any left the next day, cold empananda makes an excellent lunch.

When it comes to half moon shaped empanadas, I’ve often wondered about a connection with the Cornish Pasty. Galicia is a Celtic region sitting directly opposite Cornwall, across the Bay of Biscay. While I can find no documented food connection, I have read that the Celts arrived in South West Britain from Iberia around 5000BC…