Some time ago, while preparing a massive barbecue with Oli in Barcelona, I noticed an interesting crisp packet on the table and asked about the contents. Oli mentioned they were unusual and that I should take them home – he said, “They are really good if you break them up and sprinkle them on a fish soup, or similar.”

So I took the FishSnack’s Sabor Original home and put them in the cupboard.
A couple of weeks later, I decided to eat the FishSnack’s, before they disappeared into a black hole and six months passed their sell by date.

I was somewhat surprised by the contents of the bag. Straightaway, I was hit by a smell of bacalao – cod cured and dried with salt. The texture was pleasantly light and crispy and the taste was strongly salt and fishy – quite umami. 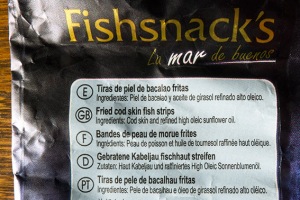 I had been expecting a fish flavoured potato snack, but when I looked carefully at the ingredients, I discovered, cod skin fried in sunflower oil – nothing more! These won’t be to everyone’s taste, but they are probably the most unusual crispy snack I’ve had to date (other than spicy crickets) and no gluten, no artificial colours or cholesterol. OK, so there’s a fair bit of salt, but crispy snacks have to have something exciting going for them. These definitely go well with a drink! 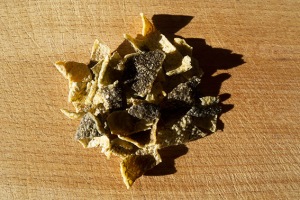 Bacalao, AKA salt cod will literally keep for years, perhaps even decades without spoiling. The technique of curing by air drying cod dates back to the Vikings, who it is said, gave the procedure to the Basques, along with directions to the Grand Banks off North America, where the sea was literally full of cod (one could practically dip a hand in the ocean and pull out a fish). Unlike Norsemen, the Basques had salt and perfected the art of salting, so perhaps there was some trade off. According to Cod: A Biography of the Fish That Changed the World (by Mark Kurlansky), Basque fishermen were sailing across the Atlantic for 500 years before Columbus discovered America. It is said that the Basques kept their fishing grounds a secret and others who tried to follow them foundered on the way. Regardless, salt cod became an essential cheap staple (along with cured meat and sausage), in the centuries before refrigeration – all long journeys and voyages depended on food that would keep for the duration.

I’ve looked up FishSnack’s online and did come across some negative comments – they do smell strong and the flavour is intense, but I liked them – I will go and buy more the next time I’m in Spain and I definitely prefer them to Marmite!