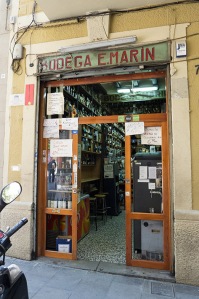 While I was walking round Gràcia looking for markets and restaurants, I came across Bodega E. Marin, a fantastic old bodega. In Spain these are wine shops/cellars, which may also sell groceries, but the focus is on wine.

Through the front door of this bodega there are a couple of counters on either side and small stools for customers to sit and sip a glass of wine. 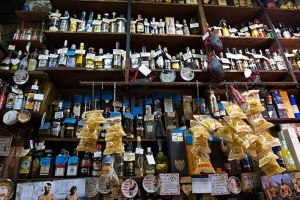 On the left hand side, just past the counter there are shelves crammed full of every spirit ever distilled. I counted 12 types of tequila on one section of shelf alone. Botas (wine skins) and Torres Artesanal Potato Chips hang from the shelves, hiding the precious liquors.

Below the drink there’s a fan siting on top of a cigarette machine. To the right sits a glass fronted refrigerator containing bar snacks (tapas) – patates braves, croquetes, anxoves, músculs, etc. On the front door to the bodegas, among many hand written signs for drinks, I noticed entrepans (between bread) – sandwiches (in a baguette) of llom, truita de patates, fuet, formatge, etc. – all priced between €3 – €4. Beyond the fridge there’s a full size espresso machine and almost to the roof you will see huge wine barrels.

No space is left unused – there are even bottles hanging from the ceiling! 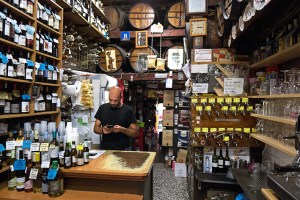 Directly above the counter there are more wine barrels – these are not for display – there are taps (right) connected to the barrels to dispense wine. Not so many years ago these bodegas contained more barrels than bottles. You can go in and order a glass of wine, port or sherry straight from the cask. Not many tourists realise that people bring in their own bottles and jugs to be filled up. In the days before mass production this was normal. 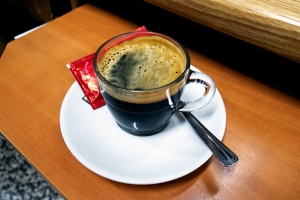 I had a carajillo de cognac to keep me going for the rest of the afternoon – it cost me €1.65. Expect to pay between €1 – €2 for a glass of local wine from the barrel. No doubt they sell a great vermut de la cassa. Bottles of wine, cava and spirits will be cheaper here than most supermarkets.

I noticed a review of Bodega E. Marin where someone suggested keeping it quiet and not telling anyone, so that it would remain unspoiled. Years ago, I lived on Carrer de Milans and we had a fantastic bodega on the corner – it was twice as big as E. Marin and also served as a corner shop selling ham, cheese, potatoes, etc. Back then one could buy water in recycled 10 litre glass bottles and the bodegas stocked them. Once you’d paid a deposit the water cost peanuts. I occasionally bought a litre of port from the barrel – I think it cost 125 pesetas (about €0.75). Sadly that bodega is long gone and they are disappearing fast, so do frequent the old bodegas and do tell all your friends!