The Red-legged Partridge is a small game bird introduced to Britain from mainland Europe (particularly common in France and Spain) in the 18th Century . It’s estimated that there are between 72,000 and 200,000 breeding pairs in the UK. The shooting season for partridge is a month longer than for pheasant and runs from Sept 1 – Feb 1. See my post here for plucking and dressing.

Having roasted and pot roasted large numbers of partridge in the past, I thought I’d try something a little different today.

First of all, warm a level teaspoon of coriander and cumin seeds until they give off a pleasant aroma. Do not let them get too hot and burn. Grind the warm seeds up with a mortar and pestle.

Season the partridge and brown it (using a metal casserole or similar cooking vessel) in some olive oil to caramelise the sugars in the skin. Don’t overdo it, the intention is not to cook the bird at this stage, but to add flavour. When the partridge has taken a little colour, remove it to a plate.

Continue by cooking the onions, using the same casserole and oil, until they go translucent. Sprinkle on a pinch of crushed chilli and add the aubergine and garlic. Cook gently for 5 minutes or so, until the aubergine changes colour.

Grate in the pulp of two medium tomatoes and discard the skin.

Chop up and add a preserved lemon (you can buy jars of these quite cheaply in London or make your own), along with 2/3 of the ground coriander and cumin (save the rest for later).

Squirt in the equivalent of a dessertspoon of harissa. – a fiery chilli paste from Tunisia, available in most supermarkets. I try to buy Le Phare du Cap Bon Harissa, which is imported direct, as opposed to being a watered down supermarket brand. In point of fact, it is quite simple to make it at home, but it’s handy to have a tube in the fridge.

The olives go in next, with a splash of sherry vinegar and two bay leaves.

Pour on half a pint of game stock (chicken will do) and return the partridge to the pot. Put the lid on and place the casserole in a preheated oven at 180º C for an hour. Turn the bird over, taste and adjust the flavours after 30 minutes. I used another spoonful of harissa and a splash more of sherry vinegar. Harissa tends to dissipate a little with cooking, so don’t put it all in at once.

In the meantime and in keeping with the Moorish theme, I cooked some chickpeas in a pressure cooker. 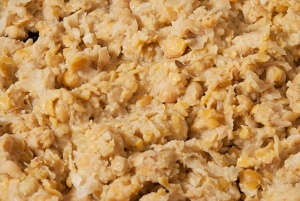 I fried a couple of finely chopped garlic cloves in olive oil and mixed in the chickpeas, the remaining cumin and coriander, along with half a teaspoon of tahini. I poured on a little cooking liquid from the chickpeas, squirted on the juice of half a lemon (fresh this time) and roughly mashed this up with a potato masher to make a chunky houmous. Sprinkle on sea salt to taste. Serve with the partridge, as per mashed potato. 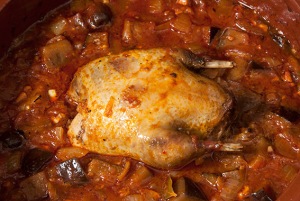 The partridge, aubergine and harissa tasted amazing and the rough houmous made the perfect accompaniment, even though I do say so myself.

I recommend drinking a Spanish red with the partridge, such as Can Feixes Tradició Crianza.

8 Responses to Partridge with Harissa