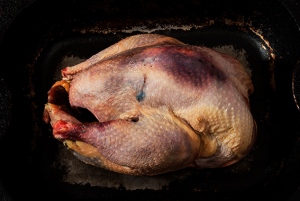 I caught a glimpse of what I thought was a recipe for pheasant and sausages (on the web) a few weeks ago, but having gone back to find it (and I did search extensively) all I can see now are topics on pheasant sausages. So, having a glass half full, I set out to create my own recipe.

The pheasant is native to Asia and was probably introduced to Britain by the Romans – they were definitely well established by the time of the Normans. It’s relatively easy to buy pheasant from a decent butcher during the shooting season, October 1st to February 1st and from December onwards they should be the size of a small chicken. I recommend hanging pheasant (intact), in a cool dry place, for at least 3 days and up to 10 days to improve the flavour. Once plucked and gutted a pheasant should be refrigerated and eaten within a couple of days. A good sized pheasant will feed 2 people (even greedy ones like me). 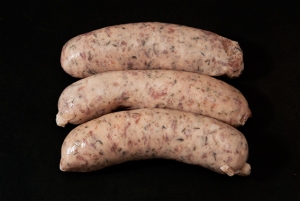 Cumberland sausages take their name from the Cumberland pig – an animal bred for the cold wet climate of Cumberland (now part of Cumbria) in the North of England. These pigs became extinct in the 1950s, but their name lives on in this popular British sausage, which contains black pepper, herbs (sage in particular) and spices. The Cumberland sausage is traditionally produced in a single coil without links, but it’s common to find individual Cumberland style sausages in all butchers and supermarkets. 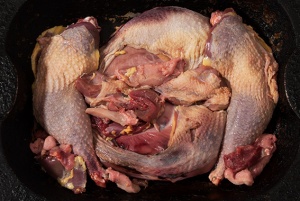 Chop up the pheasant into 6 large pieces and whatever meat that can be removed from the underside.

Using a cast iron casserole, brown the bacon in olive oil and remove for later.

Brown the sausages all over and reserve.

Dredge the pheasant pieces in seasoned flour (mix in half the ground herbs)  and taking care not to overcrowd the pan, fry the bird until it takes some colour. The idea (at this stage) is to caramelise the sugars in the skin and increase the depth of flavour – the proper cooking comes later. Add the pheasant to the bacon and sausage plate, once it has been suitably bronzed.

Fry the onion in extra virgin olive oil until it goes translucent, before stirring in the carrot, celery and garlic. Half the bacon can go back in now, but save the rest for later. Mix any leftover flour into the mirepoix to make a roux. Slowly stir in the pheasant stock and red wine to make a rich sauce. The remaining herbs, bay leaves, pimentón, anchovy paste and red wine vinegar can go in now too. Bring the sauce to a simmer and check the taste – add more seasoning if necessary.

Return the pheasant pieces to the casserole, followed by the sausages. Cover with a lid and place the pot in a preheated oven at 150º C.

Cook the pheasant and sausage casserole for 2 hours in the oven, stirring occasionally.

When two hours are up, check the seasoning again before mixing in 1/8th pint of crème fraîche. 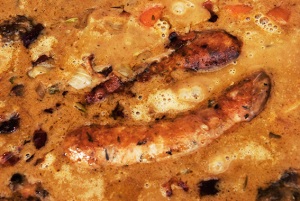 pheasant and sausages with cream

Sprinkle the remaining half of the crispy bacon on top of the casserole for decoration and serve with mashed potato.

14 Responses to Pheasant and Sausage Casserole