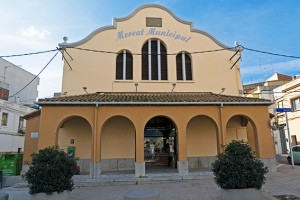 Callella has a small indoor market – Mercado de San Jaime, designed by architect Jeroni Martorell and  built in 1927. In contrast with Barcelona’s big city markets (La Boqueria, Mercat Galvany, etc.) this one is quite tiny.

Inside the front door, there are two fruit and vegetables stalls, David i Christina on the left

and Cal Xoi on the right – both selling top quality local fare.

Suitably, the stall along side Fem Salat, is a fresh fish stall – Peixateria Cento i Sonia.

The fish here is sourced daily from the local port of Arenys de Mar. 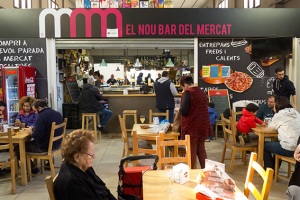 At the back of the market, there’s a fantastic bar – El Nou Bar del Mercat: La Tasca de la Vasca.

On Saturday mornings, Calella has a weekly market in the car park next to the market house, which you can see in the background.

There were oranges everywhere. 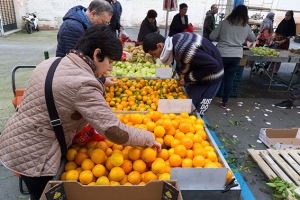 Unsurprising, since Spain is a big orange growing country. 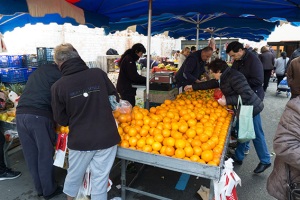 I noticed, last week, in the neighbouring town of Pineda de Mar, that the high street is lined with little orange trees, each containing at least two dozen mandarins.

Walnuts were also in abundance, 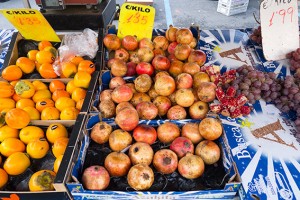 All types of vegetable are available – most being locally grown, including what would be considered late spring and summer varieties in the UK. 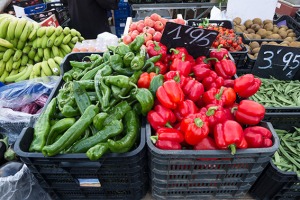 and tomatoes are imported from Spain by British supermarkets during the winter.

I saw tomatoes and peppers growing on an allotment last week, so even Cataluña in the north has enough sun for two vegetable growing seasons.

Calçots are a particular Catalan delicacy – they are a forced spring onion, created in Valls, and cooked by blackening over a fire of vine branches. Calçots should be served with Romesco Sauce or Salbitxada.

Here the vendor obligingly held up two green cauliflowers for a customer just as I raised my camera – note the fantastic large garlic next to the lemons.

These baby artichokes looked perfect for deep frying in batter 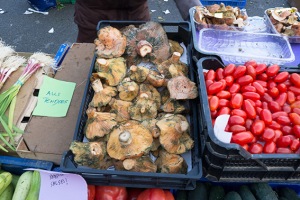 and there were still some saffron milk caps on sale – these are a very popular mushroom in Catalan cuisine. The sign next to them indicates that they are from the local Penedès wine region.

Vegetables are not the only thing on offer here – this charcuterie stall had all sorts of cured meat, sausages, bacalao, cheese, olives and hand cut jamón iberico. 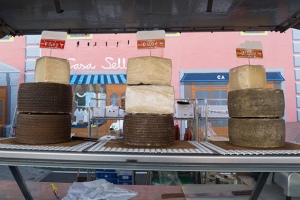 The cheeses look to be a complete bargain at about a third less than deli and supermarket prices. 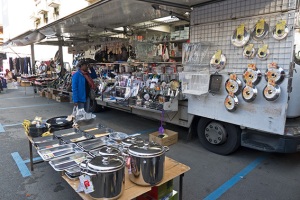 The market isn’t solely for food – I came across quite a large stall selling pots and pans.

There were also a few people selling clothes and in particular red knickers! Calella’s wealth comes from textiles and there are many shops in town selling moda íntima (intimate fashion).

This apothecary stall sells cures for everything, 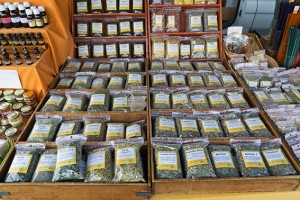 including diabetes and cholesterol!

As I mentioned before, the outdoor market is Saturday mornings only, at 2pm they start to pack up and by 2.30 it’s all gone.