I had lunch on Thursday at The French House, with friends (and fellow bloggers) Michelle and Steve from Gourmandistan. The French House is perhaps the last bastion of bohemian in Soho and is famous for being a regular haunt of Charles de Gaulle, Francis Bacon, Dylan Thomas, Tom Baker, Lucian Freud, Jeffrey Bernard (when not unwell and in the Coach) …and because it only sells beer in half pint glasses!

Back in 1992 Fergus and Margot Henderson launched The French House Dining Room above the pub – both have since gone on to achieve international acclaim in their own right.  Last November, I was very excited to hear, that Neil Borthwick, former executive head chef at Mercheants Tavern, was relaunching the restaurant above the French. My friend Oli was at the opening and described the food with relish – he also mentioned that Neil’s wife, Angela Harnett, had been in the kitchen helping out and peeling spuds!

The restaurant, like the pub, is quite small, seating about 30 people at a time. It’s very popular, so booking is essential. Initially, I could only get seats at the bar, but the helpful staff manged to find us a small table, which was just right for three. 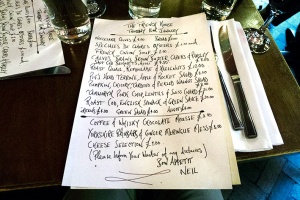 The menu is simple – perhaps, top of the line French bistro style, but with local ingredients. I like the way Neil hand writes the list of today’s dishes and signs the bottom with a, “Bon Appetit, Neil” – it reminds me fondly of Julia Child.

We drank the house red, while making our minds up – I wanted everything on the menu, it was a hard choice! 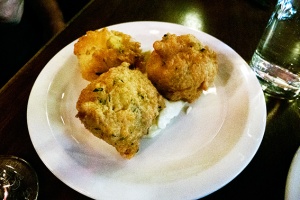 Michelle ordered Salt Cod Beignets with Aioli – these were light and crispy with a rich garlicky aioli. They definitely would have been my second choice.

Steve chose the Pig’s Head Terrine with rocket and apple salad – which was a meaty brawn without too much jelly …ahh, that was my other second choice!

So my preference was for Calve’s Brains with brown butter, capers and parsley. These were sliced brain, lightly fried, fluffy salty and savoury from the capers and butter. Excellent brains and a nice change from the deep fried version I often eat in Cataluña.

Steve had a Tamworth Pork Chop with Lentils and Swiss Chard as his main course – this was a man sized chop, with beautiful caramelised fat along the edge. At about this time, I noticed that Neil was bringing many of the orders to the table himself – you don’t get that kind of service in a large restaurant!

Michelle and I both ordered Roast Quail with Remoulade and Hazelnuts. The quail was cooked to perfection (probably about 18 minutes), the skin was crispy while the flesh was slightly pink and succulent. The acidic raw celeriac, mustard, mayonnaise and cream remoulade was a perfect foil for the bird with crunchy roasted hazelnuts on top. 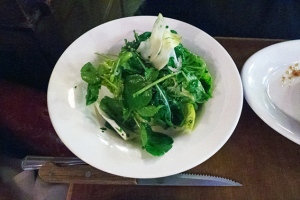 We shared a green salad 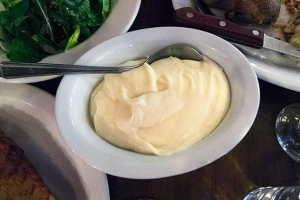 and creamy, cheese, potato mash with the main dishes.

For pudding, Michelle had Yorkshire Rhubarb and Ginger Meringue Mess. This was made with delicious forced rhubarb – in season now. Nigel Slater does an interesting version with sloe gin.

I had a delightful Vanilla Tart (from the specials menu). This was light and delicate with crisp home made pâte sucrée. On the side were sweet marinated berries, which I suspect were black raspberries… 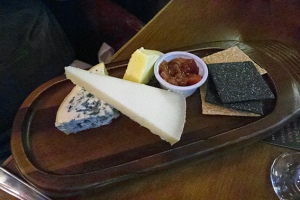 Having a simple menu and a limited number of tables, means that customers get food cooked to perfection and personal service from the chef himself. What’s not to like about that? We had a lovely relaxed lunch and didn’t leave until about 4.30.

17 Responses to The French House