Pheasant were probably introduced to Britain by the Romans and were definitely well established by the time of the Normans. It should be relatively easy to buy pheasant from a decent butcher during the shooting season, October 1st to February 1st and from December onwards they should be the size of a small chicken. I recommend hanging pheasant (intact), in a cool dry place, for at least 3 days and up to 10 days to improve the flavour. Once plucked and gutted a pheasant should be refrigerated and eaten within a couple of days. A good sized pheasant will feed 2 people (even greedy ones like me). 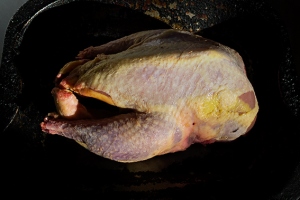 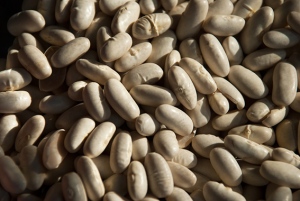 Navy beans originally came from the Americas. The beans became popular in Spain and perhaps slow cooked bean dishes were spread through Europe by the Jews expelled from Iberia (though initially these would have been dried broad beans). It is thought that the bean returned to the Americas in long slow cooked dishes, like cholent, which is probably the origin of cassoulet in France and baked beans in the United States.  If using dry beans like me, do make sure you soak and cook them beforehand. Obviously beans from a jar or tin are ready to use. 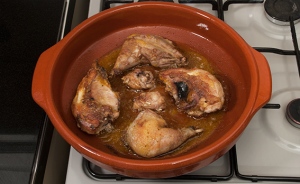 Joint the pheasant, season it and brown all over in extra virgin olive oil. You are not cooking the meat at this stage, just caramelising the sugars in the skin. Don’t overcrowd the pan, do this in two batches if necessary. When suitably brown, remove the pheasant to a plate.

Using the same cooking vessel (cazuela or cast iron casserole) and oil, gently fry a chopped onion until it is soft and brown. Stir in the bacon and chorizo with  pinch of crushed chilli and allow the meat to take some colour.

Add the carrot, celery and garlic and allow to cook for a few minutes, before mixing in the tomato purée and anchovy paste, then sprinkle on the ground herbs, pimentón and flour – stir to create a roux.

Pour in the stock, red wine and sherry vinegar to make a a sauce. When this is done, the beans and bay leaves go in too. 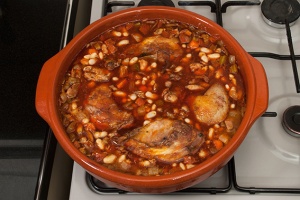 Return the pheasant to the cazuela and turn the heat up to medium.

When the dish starts to simmer, cover and turn the heat down.

Cook for about an hour and a half on low (you can do this in the oven at 150º C if your cooking vessel will fit). Stir occasionally and check the seasoning after about an hour. Cook for the last 30 minutes uncovered, so that a skin starts to form on top.

Serve with seasonal vegetables and some crusty brown sourdough bread. I recommend a robust red wine to go with this, such as Palacios Remondo la Vendimia.

14 Responses to Pheasant with Navy Beans